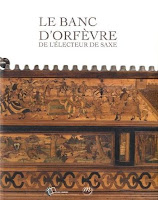 This collection of essays is the eighth in the National Museum of the Renaissance series of specialist guidebooks. Covering fascinating exhibits such as petit point embroidery from 1570-1610, painted marriage chests or cassoni, renaissance bronze reliefs, and a 16th century Mexican crucifixion triptych, this new volume in the series is dedicated to one item from the museum's collection.

The Elector of Saxony's wire drawing bench arrived in Paris in the late 19th century's when the royal Dresden collection was dispersed after the economic disaster which succeeded the Napoleonic wars. In the 1880s the bench was initially destined for the Musee Carnavalet but when they decided to dedicate it to the history of Paris they looked to sell off the bench and its tools. In a sculptural exchange with the Musee de Cluny, it joined that collection until war broke out in 1939. Afterwards, the Cluny decided to focus on an earlier historic period, so the bench remained in safe storage until 1977 when the dedicated Renaissance museum in Ecouen was opened. From 1981, inspired by 16th century etchings, it was presented to the public as part of a goldsmith's workshop. However in 2010 both its technical and artistic aspects were reappraised and it was put in room reflecting the nature of a prince's kunstkammer - surrounded by beautiful scientific objects.
Read more »
Posted by Clareangela at 14:03 No comments:

This is part of a wider project that I am currently working on. I am about to start on the actual evaluation of what the National Museum of the Renaissance, has achieved with its partners regarding Leonhard Danner's goldsmith's bench. However the digital art history aspect has been fascinating to read about.

Read more »
Posted by Clareangela at 23:25 No comments:

Of royal frills and furbelows

I've had a passive interest in historical fashion for a long time and it was very much cultivated by my marvellous step mother, who remains one of the most elegant people I know. Therefore to lure her down to London, I told her I'd booked tickets for the Fashion Rules at Kensington Palace and In Fine Style at the Queen's Gallery. It worked, for the first time in years she came down and on Saturday we did both of the exhibitions.

We started in the modern times with dresses from the wardrobe of the Queen, Princess Margaret and Princess Diana, obviously covering the 1950s-80s. It was a fine selection of frocks which reflected the public role of the figure head/royal representative and the uniform that they have to wear - they have to be seen in a crowd, reflect the interests of the country they are visiting, and yet be utterly bland in a non controversial way.
Read more »
Posted by Clareangela at 17:30 3 comments:

Lowry: Painting the past

I have a vague personal connection with  artist L.S. Lowry. He lived opposite my playgroup in the mid seventies and would regularly walk past my parents as they all went about their business. And finally at his death in 1977, my dad and his partner in crime were dispatched to the artist's house to ensure that nothing went missing. He had a hugely valuable art collection so it seemed best to send two young police constables to guard the place. There is even a photo of them in the Salford Lowry museum which is a fabulous record of a moment in time, where the art world and my dad bizarrely collided.

Read more »
Posted by Clareangela at 19:16 No comments:

There is something curiously and inevitably contrary about the figure of Leonhard Danner, the sixteenth century Nuremberger engineer/inventor. A tireless figure who we can only imagine through the machines he left behind, the scope of which indicates the breadth of his expertise, imagination, whilst channelling the vision of princely patrons. Biographical details of his life are scant and unreliable; as befits a successful, wealthy, gentleman engineer we know roughly what he looked like but his date of birth is either 1497 or 1507. What we do know is that by 1585, married to his second wife Dorothea, he died a wealthy citizen, enjoying for a brief time an Imperial Privilege derived from timber.