An excursion into Baroque music

It turns out that few art historians make excursions into music history, mainly because music can be rather technical. I am the first to admit some music articles are unfathomable without a degree in composition, maths or some such, and are rather off putting. It depends on what the musicologist is trying to convey. Are they talking about how the music is actually made; or are they describing the effects of certain musical combinations; or are they writing about theory? There are as many ways of writing about music as there are about art. When an analyst of paint does a technical report, someone of limited experience in this area would struggle to read it. So art can be just as technical as music in some respects.

I've spent a little time in choirs, and one of them concentrated on motets, masses and madrigals by well known early modern/Baroque composers such as Byrd, Tallis, Palastrina, Lotti etc. The sound, textures and rhythms of these pieces are relatively familiar; who has not felt the internal pulse of Tallis's 40 part motet Spem in Alium? Therefore I feel relatively well placed to apply a certain level of thought to how music like this works, and its effect on an audience and performer.

Read more »
Posted by Clareangela at 19:51 No comments:

The Nativity by Torquato Tasso

I looked everywhere for this poem online but it seems to be only in a fragile pamphlet 1907; I hope you enjoy reading it as much as I did.

I was very much struck with the mention of the study of nature. I enjoyed the allusions to truth and light, and the chasing away of pagan and pre Christian gods. But above all it was the 'flower of endless love' when all the imagery and 16th century language falls away, leaving nothing but warmth and sincerity. A stunning piece. 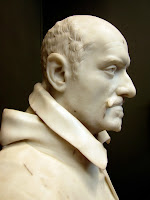 Although the intellectual life of the artist is crucial, my focus this weekend has been on the patron and his concerns. I'm coming round full circle to my initial essay idea which focused purely on the Montalto Madonna - this would embrace all the thoughts I was having regarding the renewal of the church, private devotion, poetry, music, innovations in the creation of art and so on. The other paintings are interesting but I think I will end up using them as guest appearances to support the main feature. One of the reasons for this is we can only be certain of one of the commissions - I have been unable to find out who commissioned the other paintings and this would lead to a very unbalanced essay. These are my musings about the man who commissioned the Holy Family so far.
Read more »
Posted by Clareangela at 16:18 No comments:

Perhaps it's just me, or the pernicious influence of academia but sometimes the actual paintings can get lost in the amount of theory whirring around. To clarify my thoughts, I've started by going to the paintings and looking at them carefully to see what is in them. The paintings I'm talking about are the ones mentioned in my previous post. They were all painted around the same time, using the same materials and have been well known, even when thought lost, through the written descriptions of Giovan Pietro Bellori and Carlo Cesare Malvasia from the 1600s.

Bellori was aware of the limitations of pictorial description, as he says, 'the delight of painting resides in sight, which has little to do with hearing', and I would add reading to that observation. However, he offers a brief overview of these works on copper and we are able to identify the three works of interest from his remarks,

Read more »
Posted by Clareangela at 14:26 No comments:

This post arises out of my initial essay ramblings about the artist Annibale Carracci (November 3, 1560 – July 15, 1609). I am setting out to investigate what his small paintings on copper tell us about religion and intellectual ideas of the period. 'The Montalto Madonna', the 'Temptation of St Antony Abbot' and the 'Vision of St Francis' are all dated to when he had been in Rome a few years, from 1597-1598. I shall be looking at the different subject matter of each painting and connecting it with a number of interesting issues. For example, St Francis and the renewed interest in the spiritual, possibly touching on St Teresa of Avila. I remain fascinated by the monsters in the St Antony Abbot piece so what can this tell us about real and psychological demons of the late 1500s. Finally how had the role of the Virgin Mary changed over the latter part of the century - what does his depiction of the Holy Family say about her?
Read more »
Posted by Clareangela at 14:12 No comments: