Having promised the utterances of a renaissance woman here are some musings on something a little more serious.

I am currently doing a course on Investigating the Archive at Birkbeck College which is taking us to the photo collections variously of the V&A, Magnum Agency, Royal Anthropology Institute, London Metropolitan Archives and RIBA. So far it's been incredible and each individual archivist providing a fascinating insight into their topics. However the archive that has moved me to write this was different.

The Wiener Library: 'For the Study of the Holocaust and Genocide' probably contains some of the most shocking images of modern times. We know those photographs well and they rightly form part of our collective consciousness. So our visit was to ask questions such as; how do you store them? How did they get in this collection? How do you ensure they are used correctly? How does such an archive survive and remain actively relevant? Not to mention funding...


As an aside, the library has recently moved to new premises in Russell Square which puts the archive amongst some of the most wonderful academic collections in London. And far from being a closed collection, this new building is open to the public with a rolling exhibition forming part of the brightly lit, fresh reception area. The current exhibition looks at the way children - from pre-school to teens - were indoctrinated with anti-Semitism and Nazi ideas using colouring books, copy books, story books, games and activities. 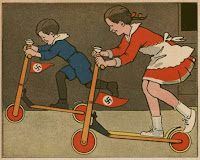 The bright appealing childish colours of the books and objects shine seductively against the Georgian building's open space - terrifying in their potency.
A history of the collection in London can be read on their site. However its German story is truly fascinating. The inspirational, prescient Alfred Wiener started collecting evidence of anti-Semitism in 1919 when he realised what was happening within the Weimar Republic. The fact that he opened the clandestine, anonymous sounding Buro Wilhelmst right next door to the government in Berlin fills me with rebellious awe. Its role was balance; they collected as much anti-Semetic material in order to attempt to counter the huge amount of government propaganda. They created everything from stickers, posters, leaflets - everything. By 1933 they had acquired 500,000 items. In Jan 1933 they moved from Berlin to Munich where they had contacts. Then the huge archive simply disappeared.

By early 1939 the UK's Jewish Central Information Office, who were also collecting and disseminating information about events in Nazi Germany deemed it wise to remove Wiener and his assistants from mainland Europe. With the help of the Dutch they relocated to London bringing with them information which the UK government found extremely useful; contacts, news and reports. Sadly his family didn't make it out in time and his wife's health was destroyed in Bergen Belsen, though his children survived.

After the war the UK government lost interest in and stopped funding the collection and the work of the Wiener Library. Despite this they assisted in providing the evidence for Nuremberg Trials, helped individuals with restitution and collected eye witness testimonials whilst the memories were still very fresh. All this information has been organised, digitised and forms a main part of the collection. The legal work remains key as they contributed to the Lipstadt/Irving holocaust denial trial.

The role of the collection is still evolving. It's important to the memory of Wiener that it remains relevant, current and in tune with the modern world which is why Walter Laqueur and consequent directors have emphasised the study of contemporary history. The new director Ben Barkow has widening the remit to encompass genocide generally, as well as emphasising outreach/educational programmes.

The physical archive faces all the usual problems that you'd expect; reliance on donations/dwindling amounts of funding, lack of space, problems with dealing with a listed building and the climate control making the small amount of space even smaller. The photos are stored in the 19th century brick wine cellar which is really not ideal. There are also the problems of the very different storage requirements of documents and photos, collections having to be split up when these two are found to be together. The archive is a work in progress, a 'living' collection and it is well organised and clearly labelled, a testament to the ongoing work of current archivist, librarians and volunteers who are tagging and digitising.

The collection is designed to be as accessible as possible. Anyone with a genuine interest in the topic can request to see items that haven't yet been digitised. However given that the collection is still a repository for sensitive material regarding the rise of the far right/neo Nazism in various parts of Europe it's a difficult judgement to make. How can the archivist make the decision about how images are used? From visits to previous 'difficult' archives, we have already seen how ambiguous photos can be manipulated and without the right context so it raises really interesting questions regarding use and control. This question could get interesting so I am leaving it there for you to ponder.

This archive is proof that one person can make a difference and their legacy can live on and serve an important purpose; information is power.
Posted by Clareangela at 12:49