A good exhibition should spark a thought which sets your whole mind alight, a beacon of artistic ideas, illuminating a world of experiences and memories. Today an artist set me thinking about feminism or being a feminist. It’s not a fashionable term or label but as an intelligent thoughtful human, I take it for granted that women can participate fully within society. The merest suggestion I can or can’t do something because of my sex, is for me, a ridiculous idea.

This then made me consider where I live in London where many women remain under veils, as mysterious to me as I probably remain a mystery to them. I recalled one weekend embarking an early morning jog down by the canal in my usual joggers, fleece and trainers and colliding literally and culturally with a group of women running in burqas and flip flops. Then this week there have been various articles regarding the Olympics combining the cultural and sport capabilities of women. I’m not saying that all of us are cut out to be marathon runners or comedians but it just made me ponder how can women participate fully in anything – even simple safe exercise – when many are hampered by social/religious/cultural ideas which are essentially based on male/female sexual power play. Don’t get me started on a religious dogmatic thought process…

This is not a ranting post. I merely wanted to illustrate a mind that connects, thinks about and sees all. Further, if I was making only political comment it wouldn’t do justice to a thought provoking solo exhibition by Sadie Hennessy at Wilson Williams Hatton Garden (see previous posting for Diamond Geezer) . Every one of Sadie's pieces is multi-faceted and points of entry on her conveyor belt of thought are myriad. She seriously plays with ideas of masculine/feminine power, culture, our relationships; intelligently poking fun at things that should make all of us growl at angrily, feminist or not. Yes I growl a lot.

The impression is an uneasy power struggle of co-existing sexes. 'Totem' was immediately amusing but then took on a more disturbing aspect in its relentless penile repetition. Whether the collaged postcard image was a penis fending off powerful waves or standing alone and proud like any Shard-like skyscraper, it seemed like we were obliged to worship that cock.

Nearby is the Circle of Shame; a pink baseball netball ring with long hair cascading down untidily. Never mind what this says about the lack of visibility in female sport (shame on you Saudi Arabia) but the apparently necessity and expectation that female genitalia should be waxed, trimmed or otherwise enhanced so it is less shameful is clearly demonstrated.

Her use of 1950s women's magazines and collage technique is very clever.'A Celebration of English Roses' takes unreal images of perfect stylised sexless 'roses' of femininity, add vagina rose fascinators and images are given a powerful make over. The blocked mouths then immediately convey the loss of voice that many women suffer. All you are left with is disturbing vacuous sexuality where people see women as nothing more than pretty flowers and a vagina. Or perhaps, if you prefer, an inaccessible mouth; no blow jobs here. 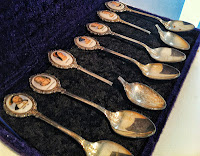 Historic sexual references are also included with the desperate power trip of England's most relationshipped troubled king is represented by the domestic souvenir of teaspoons. The offending wives are shown by having the head of spoon cut off. Poor Anne and Catherine. Particularly amusing is 'Unicorn', a parody of the Victorian china head shaped phrenology diagrams. However this one is for pornology and is a very disturbing look at the different levels of pornography; images go from eye to penis very quickly. But the laughable penis coming out of the head ensures the absurd.

Once the idea of the most disturbing types of pornography has been implanted, the mind then is terribly worried by the cute child's unicorn rocking horse, with a penis for a horn. Highlighted by the gallery skylight, it sits open and vulnerable in the space. But how is this any more/less suggestive than a burlesque performers rocking horse...which can perhaps be read as an infantilising of sexuality? Rather than the sexualising of infants? It's also rather reminiscent of the current fourth plinth rocking horse with all the power connotations there. Utterly thrillingly ambiguous.

The most meaningful installation is 'Big Night Out'. A zimmerframe hung with fabulous sequinned boots and a handbag, reflecting the inner young heart of those in their third age. Who hasn't felt like a teen internally, looked in the mirror and seen the march of time? Inspired by a 70 year old man who on seeing the older artist and her young friend, in similar clothings, thoughtlessly and cruelly remarked 'before and after'. Born of anger, this is an amazing piece.

The curator said that the [male] climax of the exhibition are the series of parody souvenir placemats with images of the Lake District being destroyed by phallic mushroom shaped nuclear explosions. These connect terrible souvenirs familiar to everyone of a certain age, 50s paranoia, phallic power, and female domesticity. This is accompanied by more dick-tators, an Emperors match box containing name tags of 'Little Darlings' such as Sadam Hussein, Mugabe, Idi Amin and Charles Taylor. These are domestic, childlike and utterly incendiary.

Other items in the exhibition left me both giggling and screaming with angry frustration as I thought more about implications and connections. This artist is incredible and though she also feels the anger, she subverts and directs it into something powerful and thought provoking. Never mind the Spice Girl reunion, Sadie has girl power by the bra load.
Posted by Clareangela at 18:44