So starts Ted Hughes's translation of the Metamorphoses. This great work has not been out of fashion since it was written over 2000 years ago. A perpetual reminder that we are fascinated by the stories of human passion and obsession, as well as exploring the whimsical caprice of gods and goddesses. At the heart of the poem is 250 stories of change, told with a lightness of touch and linguistic depth comparable with the parables of the bible. Stories that take difficult ideas and transform them so that anyone can understand them; human complexities distilled into perfect concentrated capsules awaiting release.

This depth in simplicity is how the National Gallery can take the great poem and use it to explore music, text and visuals and make it so successful. Their free summer exhibition 'Titian's Metamorphoses' has been an incredible experiment in looking how all the arts interact; paintings inspire feeling and poetry, which is a form of music, which in turn awakens the human rhythms of dance and Titian's stories dance in colour and movement across his canvases. All is full circle. Titian was the great painter of Ovid's myths in a time which was obsessed with transformation and change. The gallery has been very excited to show these major paintings 'Diana and Actaeon', 'Death of Actaeon' and 'Diana and Callisto' together for the first time in living memory and they are overwhelming in size, colour, and richness.

Music was the theme in 'A musical journey through Ovid and Titian'. I had never consciously thought about the amazing litany of music inspired by Ovid because it is 'just there' but once you start listing them, he is impossible to get away from, especially in the baroque; e.g., Handel's 'Acis & Galatea', 'Semele', Monteverdi's 'L'Orpheo'. However in this presentation, Barry Millington and David Matthews were interested in modern and contemporary musical responses to Ovid.

They discussed the first item on the programme, 'Two Metamorphoses after Ovid' op 49 by Benjamin Brittan. There are six short movements in this and we heard two - 'Pan' and 'Arethusa'. There is a live recording on Spotify where it was played by oboeist Joy Broughton in 1951 and it is a simple, haunting, beautiful work. We heard it performed on the soprano saxaphone and it truly sang. 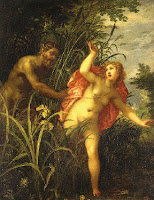 Pan is known for his rather rustic pursuit of nymphs and in this story, he chases after Syrinx who is eventually turned into reeds. He makes a pipe out of these reeds and learns how to played on her expertly. There is certainly a euphemistic quality to this, especially in the ad lib free quality of the playing. Then we heard Arethusa, another chaste nymph, who is transformed into a fountain to escape the attention of an enthusiastic river god. As their waters were to mingle for all time, again I'm not sure that her transformation was successful. Sexual imagery abounds with pastoral flows and musical trills.

Matthews's compositions began with 'Venus and Adonis' which incorporated Welsh folk song, 'My love is Venus'. He explained that it was a very literal telling of the story with three movements;

1. Venus's love of Adonis, where the piano is Adonis and the violin, Venus
2. The hunt of wild boars where Adonis is killed and Venus laments
3. When Adonis is turned into an anenome. Then it ends with the folk song melody

The simple writing belies the singing quality of the piano and violin which rise and fall in tenderness, love, loss and transformation.

His 'Actaeon' was directly inspired by the painting 'Diana and Actaeon'. It is fatal to meet a goddess of chastity naked and though she doesn't immediately kill him, as might be expected with her bow and arrows, she is surrounded by water.

No weapon was to hand - only water
That was all she said, as as she said it
Out of his forehead burst a rack of antlers

The literal musical textures of saxaphone, piano, violin and trumpet illustrate Hughes's narrative which is read over the top with perfect timing. Like children enthralled, we listen and are moved by the voice, music, poem and picture. At the violent climax, the composer was clearly revolted and the ripping and tugging is heard on quiet sad notes of the violin. As he said, 'this piece ends as a poignant elegy for Actaeon, who meets his death on the very hills where he had once been so happy'.

The final work was a revelation. Britten is known for his operas, choral works and chamber music but in true Ovidian style, his Cabaret suite transformed all my expectations. A change of lighting, atmosphere and there we were in 1930s Germany listening to jazz with a turn by the sleaziest violin I've ever heard. A reading of Auden's Funeral Blues was given a different turn as it was followed by a celebration of life. This reminded me of the Dixieland Funeral March from Bond movie 'Live and Let Die' - from theatrical tragedy to over the top celebrations.