On my course so far we’ve covered labels, art/space/geography and this week we are looking at the art of photography. So when I saw the title of the first incredibly timely and apposite lecture at the Inside Out festival ‘Death and Space’ my attendance was assured. ‘Death and the Contemporary’ according to the website, is a series of ‘site-specific events providing an opportunity for interdisciplinary discussions to consider issues surrounding the representation of death in contemporary culture’.

And where better to talk art, photography, space, contemporary cultural practices and death than in the Deadhouse under Fountain Court at Somerset House? This space resonated with all these connections; from links with the 17th century dead who were in attendance, to contemporary portrayals of powerful spirituality with the art of Paul Benney. As a brief aside, his exhibition works in perfect synchronicity with the light wells and moody, enclosed spaces of the Deadhouse. His mysterious shadowy figures beckon you, forests threaten to maroon you, saints watch over you, whilst Death in time honoured tradition simply pisses all over you.

The evening consisted of four 10-15 minute papers, a discussion and then questions/comments from the audience. The speakers included Tom Hunter, artist/photographer; Robert Hampson, Professor of Modern Literature at Royal Holloway, University of London; Professor David Bate, a photo-artist and theorist; and Dr Andrea Brady, Senior Lecturer in early modern and contemporary English literature at Queen Mary University of London; Each paper looked at a different aspect of death.

Tom Hunter admitted that until he started looking at his images, he hadn’t realised how much death was in them; in fact he prefers to see them as a celebration of the memories of his friends and his community. As a long-time resident of Hackney, many of his images record changes. Most interesting were his images of pre-demolition social housing tower blocks. When the people moved out, all that was left were the memories, the ‘snake skins of empty property’, the things left were the ‘gravestones of people living there’. He described the images as a ‘requiem of taste and ideals’ and the death of a Utopian dream of decent social housing.

His photographic references to earlier works of art were demonstrated repeatedly, starting with Millais’s portrayal of tragic heroine ‘Ophelia’. ‘The Way Home’ shows a girl, face up in water, surrounded by greenery. Is she dead? His reworking of the classic is actually his friend submersed in a recreation of a post party rapture, floating ambiguously and peacefully in an industrial urban landscape. Perhaps both the girl and the landscape around her have died? As much of the space he recorded is now under the Olympic Park, it could be said that it has been laid to rest. He continued to make these transformational connections with social spaces, landscape, displaced people, political disconnection and end of industrialisation to great symbolic effect.

Robert Hampson spoke like a poet, crafting his words finely leaving me wondering which lines to record. He spoke of the initial difficulty of linking the contemporary literary landscape with death, saying that conversely the Victorians were well versed in talking about the deceased. He quoted Graham Swift’s ‘Last Orders’, ‘Homes, Hospitals and Hospices, where people hexpire’. Death has been institutionalised and Swift speaks of it as disappearing behind the technology. Until death arrives, everyone has their own space and this last journey of Jack Dodd’s ashes examines the materiality of the body and the unoccupied space that the dead leave behind.

Hampson describes hospitals, crematoria, funeral parlours as non-spaces, designed to distance us from death. But maintains that paradoxically death is everywhere; using ‘Crash’ by JG Ballard to demonstrate the complex collisions of more non-space of slip roads and flyovers where we can often see floral (or orange police board) shrines to the dead. This engagement with contemporary death using violence and space is most evident through the medium of the press. Sites of death that we see on the news, internet etc become places of pilgrimage and a focus for grief especially if the figure was in authority – police, royalty, politicians etc. When maps are shown with the red dot amongst the green, grey of the satellite image, these sites become almost a place of within the national consciousness. For instance, I have TV image memories of Hungerford which experienced the tragic shootings in 1987 and for many years when as a family we drove down the M4, I would ponder the connections of this ordinary town with scenes of violence.

Finally he touched upon places of death in modern crime literature, which has become in my view far more graphic and realistic as the reality of death has receded, e.g, Patricia Cornwell’s popular novels about Kay Scarpetta and the use of official and non-official places of death. He also mentioned Ian Sinclair’s Lud Heat (1975), which weaves the mysterious Hawksmoor into a crime space. This was beautifully refreshed in a recent RA exhibition on his architecture where Ian Sinclair spoke of wastelands, malignant haunting and ubiquitous pyramids (tombs). Worth mentioning Peter Ackroyd’s murder mystery ‘Hawksmoor’ here too, a curious tale and will revisit with a spatial reading at some point!

David Bate comfortably told us that it’s only the living that has to worry about death, which when the room was as cold as a tomb was a handy physical reminder of transient inconvenience. In my view he approached the space-death-photograph theme in the most interesting way.

Firstly he looked at his own work of recreating minor domestic accidents, where everyday objects are broken in everyday life to become ‘la nature morte’ or still life: a memorial to dead objects. His uncanny ‘more real than real’ images remind me of the utilisation of space in surrealist Giorgio de Chirico’s still lifes; indeed he referenced Freud’s highly influential The Psychopathology of Everyday Life (1901) in which Freud discusses the psychological basis for the forgetting of names and words, the misuse of words in speech and in writing, and other similar errors.

Then he examined the historical, social/ritualistic and geographic changes that the rise in living and dead city populations precipitated. As the inner city graveyards were now causing major health issues, the new railways enabled the establishment of large public cemeteries in the suburbs. If you get a chance, get a guided tour round the Kensal Green cemetery and marvel at the Egyptian inspired architecture and catacombs. If transport influenced funerary rituals, so too did photographic technology. One of the most disturbing 19th century developments was taking of photos of the dead. Many babies died young and so that they could be immortalised, they would be arranged as if alive with their eyes open. This idea that ‘any photographed object or person has a ghostly presence, an uncanniness that might be likened to the return of the dead’ is discussed at length in Margaret Iverson’s ‘What is a photograph?’ Art History 17:3 (Sept 1994) p.450 and is apt on this point of trauma. 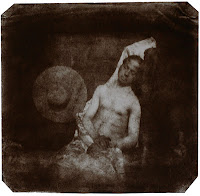 Finally he discussed Hippolyte Bayard (20 January 1807 – 14 May 1887) who is famous for his Drowned Man (1840). On first glance it is a picture of a semi naked, dead man, at peace with eyes closed and gently reclined. Images deceive because it was staged. The first photo to depict death, and as it was a self-portrait, rather shockingly it was of a suicide. His melodramatic, fake obituary said he was poor and hadn't been recognised for his contribution to photography so his life was rendered pointless. This picture undermines the veracity of death, immortalising him, showing that we don't always die when we die. A fascinating image.

Andrea Brady rather escaped the brief. The other speakers were determined to accept the challenge of the contemporary and death in the context of their discipline. However, this was for the most part, a narrative presentation about places of death in early modern cities. Through an interesting recap about death rituals, executions, church rites etc, she missed an opportunity to say something new.

When she discussed the early modern notion of death taking place in a domestic and public space and the way that this has changed, it picked up on some of Robert Hampson’s ideas of modern non-space of institutionalised death. This old raw ‘public’ death is hard for us to accept today; if we see the dead now, they are tidy, embalmed and cosmetically enhanced. She suggested that we are now so obsessed with individuality that perhaps we are so scared of being just a pile of rotting flesh and we need to maintain our image of ‘us’ even in death.

She also discussed the film ‘Nostalgia for the Light’ (2010) where a group of women are obsessed with returning home to their city with the remains of loved ones, victims of Pinochet’s regime. This film examines their desire to collect bodily fragments, which is virtually impossible in this hostile environment. As incomplete as the bodies which they will never find, their mourning can also never be completed which is perhaps the source of mediaeval purgatory for the living.


From an orthodox position, the view of Holbein’s Ambassadors shares their confidence and vanity; he is master of all he surveys. But something incomprehensible, a shadowy phallic shape floats in the foreground. Only when one starts to leave the room does the shape revolve into a human skull. ‘It reflects our own nothingness, in the figure of death’s head’.