Only connect. One year ago James Burke presented examples of the most elaborate yet utterly obvious ways of looking at the connective nature of innovation and its social effects. He demonstrated the infinite number of paths of exploration among people, places, things, and events. I’m convinced this changed the way I looked at my life because since then I’ve been struck by the colliding points of interest in my life and the patterns they make. From last week’s Art/Photography/Space/Death to this week when I’ve covered Art/Neurology/Music/Memory, all is connected. My thoughts this week have come together through a lecture on neuroarthistory, a performance of Debussy’s music, and a dinner conversation about a famous neurologist.

‘Genius is no more than childhood recaptured at will, childhood equipped now with man's physical means to express itself, and with the analytical mind that enables it to bring order into the sum of experience, involuntarily amassed.’ Charles Baudelaire (1821-1867). To see how this connects the three events, let me explain.

John Onians is an art historian (greatly influenced by the interdisciplinary traditions of Aby Warburg, Ernst Gombrich and Michael Baxandall) and presented ‘The brain as Parnassus and neurons as muses: the biology of artistic inspiration’. He spoke of the apt analogy of Parnassus, pointing out that the muses on the Warburg Institute frieze were an ancient way of explaining that artists (musicians, poets, dancers) were directly inspired by gods. If it came from a higher source, it was beyond rational control or explanation. Later this was seen as genius, with people like Baudelaire attempting to explain what was meant by this.

He took us over the development of Warburg’s ideas, how his interest in Darwin’s ‘The Expression of the Emotions in Man and Animals’ (1872), lead him explore the ideas of empathy in sensitive individuals and the mirroring of neuron activity. This is when the areas in the brain of the person watching someone else do something, light up as if the person was doing the action themselves. He explained his thoughts in a paper.
Gombrich, though slow to accept post-war neuro-biological research, took up his mentor’s ideas and explained that the more we see something we like, the more we seek it out. We need to put things in order as it is rooted in man biological urges. Baxandall looked to fine tune this with his notion of the ‘period eye’; through artists’ different experiences he could come up with new explanations for art. And for Onians, the brain is Parnassus.

Onian’s starting point is that the brain is complex and changeable. Own internal workings can't be read but we can explore it in others. As we reconstruct an individual’s neural history, it will be unique. He compared MRI brain scans of an artist and non-artist in the process of painting a portrait. Immediately the differences are obvious; the process of creating a face on canvas was so well practiced for the artist it would seem as if he was inspired because his brain is so used to looking at faces. However for the non artist the process is unfamiliar. He followed this with examples of mimicry and the story of the baby bottle nose dolphin copying the man blowing smoke. She took a mouthful of milk and blew it back at him producing a cloud of ‘smoke’ . Through copying, her neurons had grown and changed, enabling her to replicate the effects. 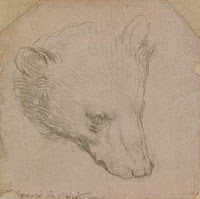 His first art history example was the Chauvet Cave paintings. (Incidentally the subject of a recent incredible 3D film)  These ancient paintings he said bettered any later discoveries; imaginative, deft, intelligent, with a three quarter view image of a bear which makes Leonardo’s bear look stiff and childish. He makes a couple of observations. Firstly he suggests that the art was inspired by the space. The humans saw the bear scratch marks on the cave walls and were moved to mirror, to copy the bears in superior mark making. Secondly the types of animals depicted filled these early humans with envy. Pale, hairless, badly equipped to deal with cold, they looked at these animals with a new envious intensity which he suggests had remarkable effect on their neural networks. It was the pleasure at repeated looking at the animals from life which inspired them to create such vivid, fresh images. And when the brain receives pleasure, it releases chemicals as a reward.

So why are cave images of this quality only seen at Chauvet? Why was their later art so linear and diagrammatic? He suggests that the art of the unconscious neural network was lost because they stopped looking at the animals and merely copied the art that had been previously produced; in doing so, lifelike representation degraded. He continued this idea using Michelangelo as an example, saying that the perfection he achieved demonstrated his new obsessive way of looking at the human body. As well as his monumental achievements in sculpture, this had direct influence on Michelangelo’s architecture; the human body would help and inspire architecture with its anthropomorphic curves and innovations in emotional visceral design. He contrasted the later art of Bronzino where he said, though beautifully executed, the artist had ceased to look at the human body with the same intensity. 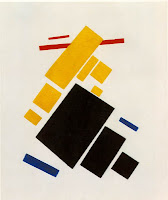 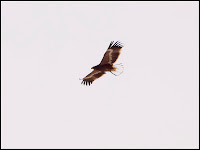 He then turned to a more recent example, using the childhood experiences of suprematist Kazimir Malevich (1878-1935). Malevitch grew up on the Steppes of Ukraine, son of a sugar grower and manufacture. Being surrounded by mechanically repetitive equipment, such as centrifuges turning sugar from brown to white, Onions explained, ensured that sensory experiences were stored in the nervous system like unprocessed negatives. The blackness of the Steppe sky, the birds of prey were all deeply impressed on him, and all inspired his later abstracts of aeroplanes, coloured squares and white on white works.

Before letting Dr Onians conclude, let me briefly turn to Claude Debussy and musicologist Paul Roberts. He has delved in to the composer’s mind using primary documentation, contemporary recording and the music itself in an effort to capture the man. Using the collection ‘Child’s Corner’ Debussy completed a psychological musical portrait of the toy box inhabitants but from the standpoint of an unaffected child. In this way he could bring reality and imagination together in a non-sentimental way. This collection was published when his daughter was two and is a snapshot of where his brain was at a certain time – a ‘present’ mix of his childhood and her childish world view. The opening piece which delighted me was a nonsense piece called ‘Dr Gradus ad parnassum’. An incredibly difficult piece which demonstrates that repeated practice is required repeatedly to step in the footsteps of Apollo.

you can attempt to explain art by looking at the artist's political, social and cultural affinities, he says that something more unconscious, a visceral engagement with childhood is a very powerful tool for the art historian. His interest is in how people make art in a particular way and looking at the brain, a veritable seat of the muses, is a good place to start. If we take neurologist  Oliver Sacks's insight on this;  'If we wish to know a man, we ask 'what is his story - his real inmost story?' for each of us is a biography, a story. Each of us is a singular narrative, which is constructed, continually, by, through and in us - through our perceptions, our feelings, our thoughts, our action [our art?]...biologically, physiologically, we are not so different from each other; historically, as narratives - we are each of us unique'.  And there lies the heart of art creation; if we can practice telling/showing our unique stories with the stimulating freshness of a child's eyes, genius is found.

In the meantime, I'll just keep making the connections.
Posted by Clareangela at 14:36