After a normal day of Formula 1 photos, a university seminar on disturbing medical images and a podcast about Galileo and psychopaths, I returned home and wondered what to relax with on the iPlayer. A timely text from a friend recommended the Charlie Brooker Weekly Wipe - 'do it now - it's 30 minutes of life well spent'. This collection of acerbic observations from the news was amusing but the section on US gun culture needed no commentary from Brooker to be shocking; just to watch snippets of adverts, the Piers Morgan shouty interview with Alex Jones and the small child showing off her pink REAL guns was astounding. And worrying. Which is why when I saw Jay Gun: The Most Dangerous Man on the Planet, I didn't know whether to immediately laugh or cry.


His first solo exhibition is described as ridiculing 'the absurdity of gun toting machismo. A collection of home-made guns and 'other gun related stuff' satirically takes its cue from American gun culture and weapon informercials'. Because the gun section from Weekly Wipe was fresh in my memory, my imagination was caught and his ideas connected.

The exhibition space is quite small but full of surprises; immediately you go in and are confronted with 'ArseAnal' (2013). This installation is comprised of a wall filled with guns made from found wood and other garage objects, with his gun infomercial to accompany them. You are encouraged to unhook them from the wall and play with these inventive, childlike guns - I remember my brother running around the garden at home shooting baddies with something like these, all handcrafted from stuff he'd found. Each one has a QR code which links to Jay Gun's gun cabinet with a picture and caption of each. The Punisher, for instance, is 'a super modern one-hander with an extra booster barrel that doubles the velocity of the power bullets. It shoots up to 20 bullets per shot. Using this gun in short distance combat is an absolute joy. A real killer!' Ouch.

The opposite wall is overwhelming, with an organic machine drawn directly on in graphite pen. Like a jungle, the gun add ons have grown and grown and the menacing nature and detail of the machinery engulfs you. However it is the coloured versions of this that are most approachable, in alluring blue, yellow and orange. Like girl's pink gun, they appear to make killing machines - and images of them - acceptable and 'nice'. At least Jay's are something that you'd like to hang on your wall. 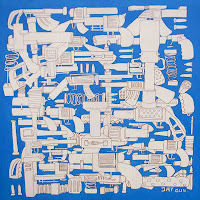 This show encourages interactivity and we are invited to kill off the artist in a shooting range. Rather disturbingly on the opening night, one 'manly' man was determined to keep trying until he had shot Jay through the heart. After half an hour of vigorous shooting with the clay pellets, he ceased but it demonstrates that once someone has a gun in their hands, 'they equip you with the perceived power and invincibility that transforms you into a hero' - or make you appear uncontrollable or unstoppable. Happily, as a complete gun novice, I failed to fire it, succeeding in only making the cartridge drop on to the floor. There is no stopping my idiocy...but I enjoyed trying it and popping in the pellets.

I struggled with his concept of the gun manifesto, not really getting it, if I'm honest. The original work by Marina Abramovic, 'An artist’s life Manifesto' is beautiful and poetic but his version takes on a more terrible aspect. I suppose the nearest thing I can connect it to is the Futurist's Manifesto (1909), which glorified war, violence and revolt. As an ideology it was repetitive, unpleasant and came to a crashing end in the First World War when many of its prime movers were killed. In Jay's manifesto, the most moving section was number 11:

Anyone who has experienced gun fire knows the intense silence which follows the shot. Once the  reverberating echo has died away, the ears recover from the noise and leave you with a buzzing head.

So did I laugh or cry first? If you must know and without holding a gun to my head, I laughed, then turned thoughtful. Lacking in this room was noise; perhaps the only time when I wish I'd been to an opening night with bangs, shouts, hubbub and hopefully a rowdy recitation of the Manifesto. Yes, what was missing here was the smell of spirits, testosterone and an underlying menace. Which takes me back to Charlie Brooker's show and the irony of them reviewing one of the most funny gun violent films of the year so far, Django Unchained...