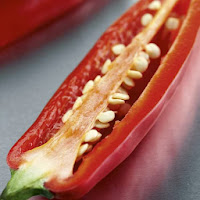 I can't remember a time when I didn't read recipe books for fun. At home they sat on the most accessible book shelf, within easy reach of us all. My dad would turn to them for education, inspiration, travel guides and kitchen companions. Perhaps he'd bought some exotic new ingredient that had made it from wherever to Hereford. I haven't forgotten my first Christmas pomegranate, not to mention our first ugli fruit. Or he'd made friends with the chef of a new restaurant in town and been shown how to make something unusual. His collection of books now sits with my brother the chef but I still find it pleasurable to absorb new culinary ideas and culture whenever a recipe book comes my way.


Today I was at J's house talking food with his father. Indonesia was very much part of his early life with the food making up many of his remembrances. It's also why he believes that a meal isn't a meal without rice - even Sunday lunches have been known to include it. I understand his chicken curry is also very special. Indonesian food - or at least with this heavy Dutch influence - is a cuisine with which I am unfamiliar, my only experience being a 'rijsttafel' at a London restaurant. I was told this one wasn't a patch on Oma's version. With this in mind, I have been lent 'The Art of Indonesian Cooking' by Ina den Hartog and have been avidly reading it.

This book is late 60s/early 70s, therefore pre-Keith Floyd and his rice wine based shenanigans. A time when UK olive oil was sold in pharmacies and the nearest thing to an avocado was the bath suite. So the ingredients it describes would have been unimaginably exotic to those people who didn't grow up with them. The recipes are a mini adventure; they give the local Indonesian name for lemongrass, tamarind, chili so you need to read the entire book and delve into the culture in order to decipher the ingredients.

It's not just a cookery book. It includes charming fables and descriptions of rituals, no doubt explained by the author's cook to the author. Being a lover of Ovid's Metamorphoses, Aesop's fables and fairy tales in general, it is the food fables that inspired me to write this. I include one of the stories below.

Once upon a time there lived, in a poor village, a rich but avaricious man. He possessed a flowering vegetable garden and delicious orchard where throughout the year djambu tree was bearing fruit. When the village people begged him for food, not only did the man refuse them but he shooed the poor people away and strengthened the guard around his property.

One day this heartless man hired a boy called Achmed. He did odd jobs in the garden and his heart was broken when he thought of the poor and hungry villagers. So heavy and sincere was his compassion that every night he fell asleep crying and always dreamed that he would be in a position to give away those delicious fruits and vegetables.

This was now seen by one of the gods and he was moved by it. It then happened that when Achmed had fallen asleep, birds rose from his head, circled around and collected fruit and vegetables, and took these to the village, to the great joy of the villagers.

The next morning the avaricious man discovered the damaged gardens. He was furious and doubled the guard. Achmed slept again in the southern veranda, close to the place where the haystack stood and where one sometimes bound atap which is used for roofing. That night everything was repeated, but the guards did not notice anything because they were only watching for men. When the following day the rich man saw the damaged gardens and orchards, he flew into a passion, fired the negligent guards and decided to watch the gardens himself.

That night, filled with revenge, he was walking amongst the southern veranda. He saw the sleeping Achmed, the arching birds, rising from his head and the picking of the fruit and vegetables. The man awakened Achmed, embraced him and understood the lessons of the gods. According to legend, hunger was never suffered again in this village.


The imagery of the circling, arching birds and symbolism of the berry tree is conveyed in such a simple way, yet the ideas continue to whirr round the imagination long after the story has ended. Being woefully ignorant, I wonder if this tree is the djambu boros, or Tree of Life? Or simply the Indonesian myrtle with it's sweet juicy fruit, enjoyed by the gods, according to legend. The gods decreed that the feast provided by the garden did not belong to just one person, they knew food was designed to be enjoyed by many gathered convivially around the family table. With beer 'drunk in large quantities and with great enthusiasm', according to this author.

If I was to choose something to cook from this book for J's father, I think it would have to be the very simple nasi goreng with its serving suggestion of pickled cucumbers and prawn crackers. I give Ina den Hartog's version below and when I make it I will return with my verdict.

3 1/2 cups rice
1/2 lb pork, chicken or corned beef (I love that it suggests corned beef, my grandad would have approved!)
1/4 lb ham
2 tablespoons chopped onions
1 clove garlic, 2 leeks
2 lomboks (1/2 teaspoon trassi)
salt and ketjap to taste, and butter
Boil the rice in the usual way and let it cool. Cut the meat or chicken in small pieces, boil them in water till they are done, and take them out of the water. Chop the lombok (long not too hot green or red chillies), garlic and leeks finely and saute them with the chopped onions (or trassi). Add the meat or chicken and the ham pieces.
Leave it on the fire for a few minutes and then add the boiled rice. Stir well and fry until til the rice is hot. Flavour with salt and ketjap. Decorate the nasi goreng with strips of omelette and fried onions. Serve with atjar ketimun and fried krupuk and a fried egg for each (mata sapi)


Once I have perfected this, then I can think about compiling a rijsttafel fit for the gods. Or just J's father - just to say thank you for lending me this wonderful recipe book.