What is Sculpture Made Of?

This lecture opened in entertaining style with an immediate reference to the previous one. Dr Dent had practically skirted over material/technique of sculpture but here Dr Jim Harris went straight into this interdisciplinary aspect with the statement (I paraphrase):

Sculpture is what it is we do when we take a memory of people. It goes to the heart and into the very notion of humanity.

We quickly dispatched painting and slammed the door firmly in its face. Painting can be anything but sculpture is better. Materials are as varied as the sculpture they make. Painting tells us a lot but the material of sculpture tells us more. At this point we could have concluded the lecture. But as he says, we would have been rather disappointed. I think what we needed was to be in a quarried amphitheatre, sat amongst the elements of sculpture.

But what sort of quarry? We are only really discovering what some of these pieces are made from. Is that alabaster or marble etc? Historically this has been of secondary importance but has become more fundamental to the art historian. He took us through a range of materials, then focused on one object and how the material affects the interpretation.

4. Gold. Precious metal working. Making a statement about wealth and status. The survival of it was incredible when many examples have disappears during fund raising.

6. Wood. Can be used in its natural state or gilded or polychrome/painted. An extremely flexible material. The law can impact sculpture through the Guilds; the sculptor from Kalkar would not have been allowed in Germany, where standards were strictly maintained - If you look at the back of some of these, they are bodged together to make a united front. Scale can be played with depending on the density of wood. Boxwood was the material of many high status objects. In my Montalto essay I made reference to boxwood prayer nuts.

8. Stone. This is the most pervasive and widely used material.

Limestone. The many types of stone affects how it can be worked, for instance he cited the Courtauld's Virgin and child. 'A life-size limestone sculpture of the Virgin and Child attributed to the major 14th century Flemish artist André Beauneveu has been loaned for three years to The Courtauld Gallery. Beauneveu was one of the most gifted artists in France, and this monumental statue is an outstanding example of late Gothic sculpture and the only example of his work on public view in Britain'. The stone was local to the artist, the block's geology is evident as he turned it so he could use the finer stone for the face and child. Coarser strata can be seen on her shoulders and drapery.

Alabaster. Comes from the Midlands and has been mined for hundreds of years. Astonishing caves have been formed by carving into intrusions and leaving supports. Massive blocks could be removed, enabling such sculpture as Epstein's Jacob and the Angel. Although now it's more likely to be mined for gypsum. It's a difficult material as it forms a kind of skin if left, so it's hard to work. Local altar pieces were likely to be alabaster. It is a dense stone so it can be worked finely. Despite it's own beautiful surface, it has the perfect surface for polychroming. On many sculptures you can see traces of colour and gilding, eg azurite. Calcium sulphate is the perfect base for the application of colour.

Marble. Sliced out of mountain. Carrara. It has always been desirable. Sumptuous. Versatile. But also painted. Could be so detailed. Donatello's tiny shallow Rondel in The Feast of Herod/John the Baptist.

Finally we come on to our case study. 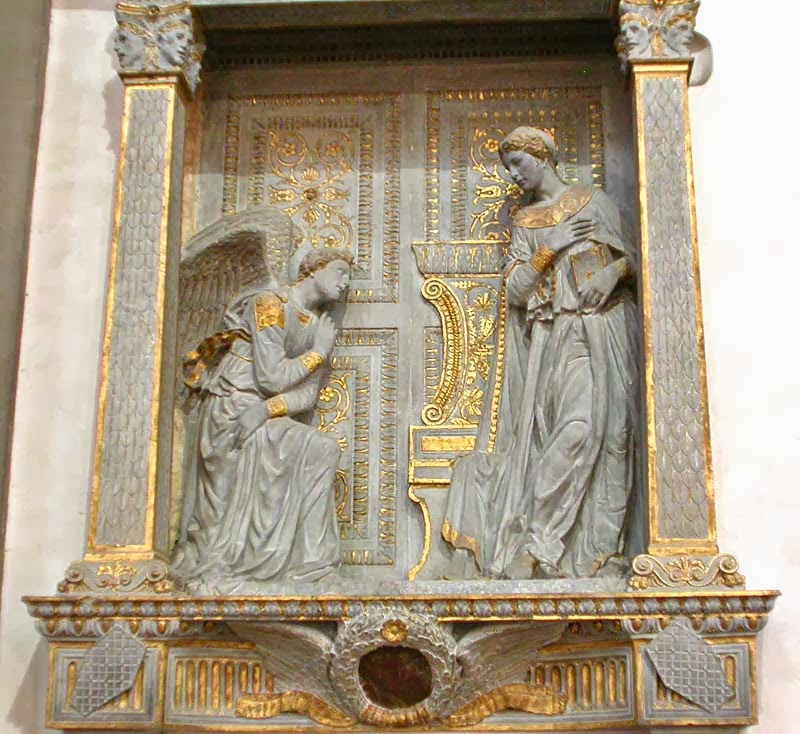 Donatello's Cavalcanti Annunciation (1438-42) is a Florentine sculpture par excellence. Vasari mentioned it in his Vita. It's carved from the most Florentine of stone. Cut from the quarries at Fiesole, the workmen knew precisely which bit of stone they wanted and from where.

Macigno is dense sandstone from Tuscany. Its name is an ancient colloquial term for millstone. However there are uncertainties as to its terminology because of its geological origin and where it was actually laid down in the strata. All over Tuscany it was different with colour variations. Pietra serena and pietraforte are 'free stone', ie no direction or grain.

Pietraforte is excellent for large scale architecture because of the lack of veining, so it can be made into columns as in the Lorenzo chapel. It was a high status stone but the value lay in its strength. By 15th century it was used for decoration such as stairs and other architectural detail but not sculpture.

Pietra serena on the other hand was recognised by Cellini for its fine grain: aesthetic rather than strength. As a stone of Florence it was part of the culture, mentioned in poetry, eg Dante's commedia stanza 19 and the Decameron of Boccaccio. The stone developed magical qualities due to its roots in the locality.

The Annuniation has undergone various variations in colour, including pure white like marble. But there is little doubt that it was always supposed to look like Florentine stone. It was an appropriate material for civic symbols, such as the Florentine lions, it was the 'stuff' of this place.

The sobriety of the patrons was demonstrated via the medium of stone, as Dante said, the hardness and durability of it reflected the intractable people of Tuscany; something of the mountain and stone about then. Therefore this family commission showed they were as embedded in the City as the stone.

This was not a new material for Donatello. However he was exploring what could be done in relief because this stone not used for this purpose usually. So he was combining al antica motifs with Florentine stone, rooting the sculpture deeply in his home city.

This very deep relief, the professor concluded, was an unprecedented sculpture in meaning, material and family. The only anomaly was a black marble roundel/disk, making a direct reference to antiquity. Surrounded by the carved Florentine stone wings, it was clearly suggesting that Florence was giving flight to the ideals of antiquity.

At the end of the scale is his 'Entombment' (1449) where deception is at the heart of the project. He created a porphyry tabernacle with divine, funerary and imperial connections. However he wasn't working with granite but limestone as it was impossible to work since the ancient methods were lost. He made an object out of one material and turned it into another.

So in one project he was true to the material, the other was utter theatre of materiality. This transformation of materials continues into modern times. Nothing is what it seems. Ultimately it needs to be appropriate to the project with attention paid to the material and the crucial message it's conveying.

Questions were sensible this week. They must have read last week's notes.

Ingenuity. Artists added value to the stone they carved, though names have been lost some remain high status objects. Some have an intrinsic value, especially the unknown gold workers who created beautiful things. Macigno was a cheap stone but the family got Donatello to do it. It was all about status.

Particular stones were used to create a sense of place. Venice was mostly mud but they used Istrian stone, emphasising trading and their own possessions to beautify their city. In the case of Rome, civic identity is tricky as it is tied up with papacy and families. Modena had no stone but used terracotta.