An unknown V&A Cabinet - some thoughts 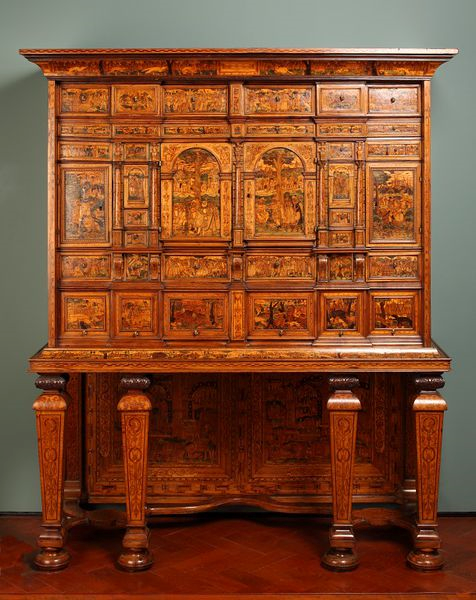 I'm on the cusp of handing in my dissertation and to both my delight and dismay, I'm still finding potentially relevant interesting additions. As I explained to the lovely assistant curator at the V&A last week, it's as if the bench has provided the key to many doors and I'm being invited in to explore. Two items have come to light this week and I wanted to  quickly get some thoughts down on paper. The first is related to my V&A visit, and the second is a Jost Amman woodcut which I have just discovered. I will be focusing on the first below.

On Thursday afternoon we went down to the old post office which serves as the storage for one of the most interesting museum collections in London. As we were issued security passes, the AC was there waiting to escort us upstairs to a massive lumber room with the most interesting rolling shelves contents I've ever seen. As she identified the right shelf, we looked around us, taking in the stag horn mirror, a golden bed stead, 1950s sofas, and various interesting shapes covered in white dust sheets. Like an attic of sleeping beauties, waiting for a visit from someone who knows where to find them.


We'd come specifically to see a little known sixteenth century cabinet. I was interested in seeing it ever since I found out that the person who designed its decoration could have a probable link with the Elector’s bench. I’ve said before that this theory isn’t mine, but it needs fleshing out. We know very little about this cabinet, as the V&A notes say,

CABINET. GERMAN or Tyrol, Austria; early 17th century (1560-1600). Maker unknown.
Marquetry of various woods, based on prints by Jost Amman (fl. Nuremberg, 1560-1591). The original doors are incorporated into the back of the later, and probably 19th century, stand. The lowest range of drawers in the cabinet is also a later addition.

She confirmed they knew nothing more, and the bibliography on their system was limited to a single book by Monique Riccardi Cubitt called the Art of the Cabinet. This would suggest that nothing scholarly has been written on it specifically, which leaves me in the same position that I was in whilst researching the bench. Unfortunately I have even less information,  as I knew the bench was made for August I and the designer was Leonhard Danner.

What is it that fascinates me about this cabinet? Firstly, it is beautiful. The golden patina of the many coloured woods glows with the same intensity as it would have when it was first made. The condition of the cabinet is better than that of the bench so it gives a good indication of bench's original colours. Secondly the decoration is also reminiscent of the bench - I will describe that shortly. And finally the mystery which surrounds it. For whom was it made, when, what was it for? It has many lockable drawers so it was clearly a cabinet of curiosities, or collector's cabinet, such as this similar Tyrolean/South German example from the Met.

The decoration shows hunting scenes. The larger images depict ladies and gentlemen of the court in various celebratory scenes, playing musical instruments and generally making merry. There is a wonderful image of a lady riding behind her gentleman, who has his hand on her bare breast. Another panel has a gentleman on a horse who has a falcon perched on his outstretched hand. The fashion of the ladies with their French farthingales dates the bench to about 1570-80s although I need to look into this more closely. Every panel has a background of idealised cities, forests and mountains. Smaller narrow panels have tiny images of animals from the hunt - bears, boars, and hart. Hunters crouch behind foliage with firearms, no crossbow, spears or clubs here, the killing technology had clearly moved on from 1565.

There are no identifying monograms on this cabinet as far as I could see. The only clue is suggested by the heralds blowing their trumpets, with the flags hanging down. The striped green and white possibly represents Saxony, or I feel, more likely the Duchy of Styria, Inner Austria. This fits with the cabinet's place of origin being Tyrol.

The ruler of these states at the time of the cabinets suspected date was Charles II, Archduke of Austria (3 June 1540 – 10 July 1590) who was a staunch Catholic, and promoter of the Counter-Reformation. It was his religious ideals that prevented Elizabeth I of England from entertaining his marriage proposal seriously. Interestingly in an article about the music composed to celebrate his actual nuptials to Maria of Bavaria in 1571, the author relates the processions and tournaments that took place.* This type of celebration is reminiscent of the Dresden courtly festivals in Protestant Saxony. The musical instruments and jollity depicted on this cabinet is suggestive of a celebration and a love of music and hunting. Is it an item of furniture made to celebrate his wedding?

I haven't even touched on the sophisticated nature of the cabinet's design and marquetry execution. It differs from the bench because parts of it are so elegantly done. The expression on the faces of the revellers on the front is the sign of excellent workmanship. The classical ruins speak of a knowledge of prints by Lorenz Stöer of Augsburg, especially his widely circulated pattern book and treatise Geometria et perspectiva (1567). However the rather hackneyed ruins are supplemented by the hunting scenes, which still seem quite unusual.

The design and marquetry quality seems variable. I wonder whether the ruins, the revellers/hunting scenes and the sides were done by different people. There is no proof, apart from the curious look on the horses' faces on the sides which seem comical in comparison to the delicate expressions on the ones on the front.

These are just my initial thoughts but I think there is a lot of mileage here, in terms of identifying its patron, working out what it was used for, and where it was kept. However I instinctively believe it isn't at satisfyingly complex as the bench, but that's no bad thing.