Frames in Focus: #Sansovino Frames at the National Gallery 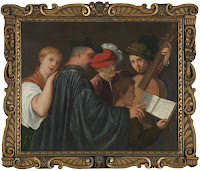 Thanks largely to a rediscovery of a love of free form dancing enhanced by fermented sugar beverages, art and writing has been rather neglected over the past few weeks. Sometimes you need to examine what is beyond the immediately visible; to step outside the frame, if you like. Which is what I've been doing so it was with a sense of familiar relief that on a lunchtime stroll I headed to the National Gallery to find whatever took my fancy.

As I headed up the stairs I was drawn to the temporary exhibition in Room 1 on the right. Frames in Focus: Sansovino Frames is their current exhibition. It says, 'often overlooked and seldom the focus of an exhibition, it is frames, not paintings that take centre stage in this exploration of one of the most inventive and exuberant types of picture frame'. Developed in Venice and surrounding territories in the mid-sixteenth century, 'they are characterised by overlapping and broken scrolls'. This is to vastly undersell them. The exuberance of carved fruit, swagging, exotically adorned female torsos, birds and animals, and putti in pine or walnut enable these works to stand as art in their own right.

They are beautifully choreographed within the dark walled room. To direct our gaze to the frame, most are without images which makes for a surprisingly expectant atmosphere. As the wall blurb states, the frames create a stage like setting for paintings of any subject. So you stand in front of the spaces within the frame, and you're waiting for something to happen, just like you would an empty stage. One frame in particular stood out as theatrical (cat 28) because the relatively plain base, the sides become increasingly elaborate, with a wonderful top - a perfect proscenium arch. It proclaims an operatic or theatrical allegiance which is indicative of a Sansovino frame, with their elements of classical architectural with broken pediments and cornices.

The emphasis on the musical is intriguing and immediately apparent. The carved gilded scroll work is reminiscent of instruments such as the harp. Or  take away the gold and you have the violin and other stringed instruments. The rhythm, balance and harmony created with the interlocking - I can't call them broken - flourishes suggest the sophisticated 'surround sound' musical antiphony of the churches of Venice. Just as Titian was manipulating canvas space, sixteenth century composers were taking architectural space and using choirs and musical instruments to great effect.

One of the frames that they chose to picture is Titian's (?) 'Music Lesson'. The singing, guitar and music being created is amplified by the partially gilded frame. Just as the sound exhibition downstairs focuses on the bringing together of sound/music/art, the frame here is yet another sensory extension. The painting is animated by the gold highlights on the frame, and immediately the girl's blond hair, the feathered hat, and song book take on new meaning. Music and light and life beam out at us in a unified whole, as effective as any of the sounds that you can hear in the Sainsbury wing.

And as you step outside the gallery, and head back up to theatre land, the Coliseum and the Royal Opera House, you see similar floral and fruity swags, putti hanging with abandon over the buildings dedicated to entertainment and music. No wonder that these frames were so popular, and remained so, and continue to feature in our galleries. They announce every painting, regardless of subject, with a fanfare, straight from Venice!