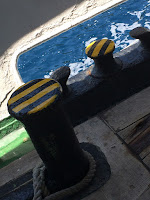 How do you view the world when you're five years old? How much of that youthful joie de vivre do you - and can you - retain as you hit middle age? Having rarely spent so much time with a young gentleman it's been an interesting couple of weeks, and in some crazy irresponsible ways, it seems I have more in common with my young nephew than my younger brother.
This is not meant as any kind of criticism of my brother. Indeed I adore him and he is an inspiration to me; he's a parent, a carer, a survivor of a very different and difficult upbringing in comparison to mine. Those six years between us might as well as be sixty. But as my exhausted adult friend and family nodded off on the final stretch of their journey, the inevitable result of an early flight, me and my nephew bonded on the ferry ride back to mine.

Good ship Postira is a fascinating place for both a 5 and 42 year old. We climbed down the steep front stairs, and passed all the wilting shopping bags; we waved at the man making sandwiches; we went round to the back where they were playing cards and drinking beer; then went back upstairs to giggle naughtily at the comedically nodding adults. We snook under the chain and up the front steps to peep at the Captain on the bridge. Then went down the back stairs to discover a porthole / portal to another watery world.
He discovered that from his shorter perspective this round window was a most exciting place to sit, cross legged. He realised that if he reached out, the bar which protects the propeller below, rhythmically catches the foamy surf and sends water splashing up. The rainbow droplets turned to salty crystals on little hands. It was also a grandstand view for the swirling vortices of minty turquoise cream formed when pulling in and out of ports. The sense of wonder on his face when the old propeller spun and revved... and his questions tested my limited engine knowledge.
Then it struck him. For a car obsessed curious mind, he made sense of our progress through the water by looking behind us, and our long lasting wake became a boat road. This regular reliable little ship is the island's water bus so this makes perfect sense. However it wasn't until we took a trip to Kotor that the notion of a boat road was truly realised; the car ferry there was a watery continuation of the tarmac.
From 9am-9pm, provided there was a ready supply of ham sarnies and bananas, a patient human Wikipedia had to answer questions on everything from theology (did God create the rainbow?) to time (does time in Croatia run differently from home because he lost an hour?), and natural history (why do the cheeky crabs keep running away?).
As his confidence in his new surroundings grew, I admired youthful adaptability and flexibility. Despite a size disadvantage, he took to paddle boarding when we were all adultly wobbly, he danced liked there was an arena of people watching, and swam and dived with fearless strength. It was due to him that on the last night, instead of a gentle stroll, we all ended up in the sea in inappropriate swimwear. We floated blissfully on the inky black water pointing at the various constellations.
There are limitations and downsides to being 5 years old apparently, 'life is difficult and unfair'. He's right, but we need to retain the endless questioning and quest to understand the world around us. We all need a hand to hold and music to dance to. With a little encouragement, we should all live without fear of trying anything new, and to never disregard unusual or forgotten perspectives. And we should all giggle endlessly at the word knickers.
Posted by Clareangela at 18:42