A love letter to the books of Ljubljana 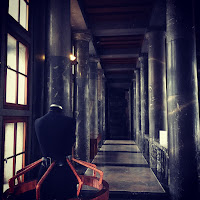 This piece came out of a month long stay in Ljubljana in October 2017. This is when I fell in love with this beautiful capital, its culture, architecture and people. I am happy to say that I am posting this whilst in the city again. They say you should never judge a book by its cover, but is it possible to judge a city by its bookshops?

I've never seen a more healthy or holistic attitude to culture than in this city. It seems that every art form combines to form something harmonious; a city gesamtkunstwerk. Operatic rehearsals cascade from open windows colouring the sculpturally rich streets below; antique shops and conceptual art galleries exist side by side. With quality bookshops on every corner, and irresistible second-hand book stalls, it is a bibliophile's dream city.

Ljubljana is also environmentally suited to cultural pursuits. The centre was closed to cars in September 2007 creating a pedestrian zone around the square named after their beloved national poet, France Prešeren (1800-1849). Inspired by the city's Roman history, the wide straight largely traffic-free streets provide grand vistas. And it is thanks to one man that the architectural style of Ljubljana offers the perfect theatrical backdrop for the city's cultural life.

Jože Plečnik (1872-1957) was the Slovenian architect responsible for many facades, churches, gardens, villas, and the intriguing 'Tromostovje' - triple bridge - which crosses the River Ljubljanica. All have an unmistakable elegance and timelessness to them, suggesting a permanence invoked by Italian renaissance architects. He wrote in 1940 about the city, 'no longer a sleeping provincial town, but the city it has always wanted to be, crowned by its castle, its streets radiant sunbeams springing off from the centre, the river its vital vein.'

However for me, the National and University Library of Slovenia is his greatest achievement. The only way I can describe it inside and out is monumental. It has artificial external rustication and many symmetrical windows reminiscent of Florence’s sixteenth century Pitti Palace. It is a hard building to miss; visible from down by the river, and up on the hillside. Plečnik said,

I have erected a building for wisdom in the city... Inside, the dark tone of respect. Black marble, big columns, a monumental staircase leading in one long flight to the reading room, where the light is. I made the reading room high and pleasant, I used wooden panelling for the walls, the floor and the ceiling, I designed wooden tables on marble columns, and modern industrial lamps to enlighten the students on their path to knowledge


The chandeliers in the reading room are inspired by the symbolism of St Catherine of Alexandria, whose gory martyrdom on the wheel is well-known. She is the patron saint of professions related to knowledge and learning, so for a city of poets, scholars, printers and librarians, she is a suitable choice. As you head towards the reading room there is a piece of modern sculpture in copper. Catherine’s wheel is represented as a woman’s crinoline by a local student, and it echoes and reinforces the continuing artistic interconnectedness of this city.

The library has been a State legal depository on and off since the early 1800s, when the dissolved Jesuit college became the library of the Ljubljana Lyceum. After the abolition of the Lyceum in 1850 it became the main reference library of the province. After World War I, it was renamed the State Reference Library and a few years later in 1921, it became the State Library. Publications from all the regions of former Yugoslavia started to pour in. However it was in its role as university library that its resources were stretched. Ljubljana as a university city could only offer eighteen reader seats, so between 1930 and 1931 Plečnik presented his plans for a new library.

Europe was heading for political meltdown by the late 1930s, and the planned new Slovenian university library encountered resistance by the Belgrade authorities. Local student protests and demonstrations ensured success in Ljubljana and as a result, the new university library opened in 1941. The reading room suffered damage when a plane crashed into it in 1944, and extensive renovations were required. In 1991 it became the national library of the independent Republic of Slovenia.

This city is always looking to the future, and worldwide intellectual co-operation. Like many national libraries, they have been working on digitisation projects with great success. The internet has enabled scholars to access rare Slovenian and other important material at the click of a mouse. However, interested members of the public can also visit their virtual exhibitions. I was fascinated to note the exquisite publications from ‘500 years of the Lutheran Reformation’.

As I descended from the library’s black marbled hallway, out of the large main door, and back into the sunshine, I was filled with optimism. Although we currently live in in a period where intellectual endeavour is treated like an expensive or unnecessary luxury, some national institutions continue to shine a light into the darkness. This city is proud of their cultural heritage, and you can see that pride within every building – and bookshop.