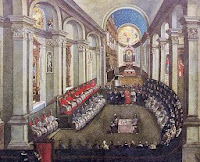 This course has piqued my interest in a huge way. After nearly spending the entire weekend – unintentionally – in the Warburg Library reading about reformation music and refreshing my memory regarding the Council of Trent, I am hooked. Happily the security guard escorted me out when he realised he’d locked me in.

Last week I cast my mind back to the historians that my A-Level teacher talked about. I refreshed my memory concerning revisionist history books of the 80/90s which were all the rage in 1990-2 and we were encouraged to read JJ Scarisbrick, C Haigh, D Starkey and disregard J Elton and AG Dickson. So finally reading the latter, who was the set text this week, was quite an interesting experience. This continuous re-editing of history proves the reformations throughout Europe at this time were extremely complicated.

Christianity was not monolithic even in the 15th century. Devotion varied; in practice and belief which had evolved. After all, the New Testament is not a set of rules or a religion. The gospels are interpreted and even the bible is made up of council picked, selected texts. Church tradition, dogma and doctrine evolves throughout the Middle Ages


The Protestant response was varied. The leaders could not agree on interpretations, so in this overview, we have to generalise. But Luther, Zwingli, Calvin had very different ideas and were distinct from one another. There was not just one reformation, there were different moments of coincidences of belief - theological and political thought in the 16th century were fluid. An event like the St Bartholomew’s Massacre demonstrates the violence and extreme tension which permeated the period.

Questioning of the Pope's Authority

It wasn’t just the Protestants questioning the authority of the church, but Catholics had already started the process years before. Anticlerical feeling was nothing new, most notably in English literature, Chaucer was caustic in his dealing with churchmen and women. Savonarola in c15th Florence began asking questions and was executed for his dangerous views. Luther was closely associated with criticisms of the Catholic church but he didn't intent to cause a schism. However by the 1520s, theological positions are becoming entrenched, with open denial and rejection of papal authority. The schism in the churches cannot be overestimated. It was a huge crisis and had a profound effect on politics, belief, lives, and people died for it.

Raphael's painting of Leo X and nephews demonstrates an immediate issue - his nephews! Popes were both spiritual and temporal rulers. Their focus wasn't about belief but political motivation, jurisdiction, and broader authority. This Medici princely pope was worldly, had mistresses and children, was nepotistic, had a keen interest in classical antiquity and was just not very holy. He was not unique in this respect, indeed the entire church hierarchy seemed to be run on nepotistic lines, with worldly wealthy cardinals establishing their families well.

This contradiction in reality and the teachings of the bible was one motivating factor behind the reformations. Another was the ongoing expensive rebuilding of St Peter's. This particularly irked Luther because it was being partly funded by the sale of indulges and mentioned in his 95 Theses. Though this classicist, self-glorifying, vanity project was the end of line for many. Indulgences go to the heart of the problem. The pope could grant salvation; via the church hierarchy, priests had the power to save you. Entrance to heaven became a financial transaction, granted by man, not god. And some of the priests down the hierarchy selling these were all too human and no better than the one buying; unholy, corrupt, not maintaining their vows of chastity and poverty. If people were to believe that this intermediary could bestow grace, the system needed reform.

The Council of Trent

Titian Portrait of Paul III - a key figure in church reformation and he set up the Council of Trent. It was convened (the latest of many councils throughout the centuries) partly to try to reconcile different heretical factions but it wasn't going to happen. Meetings took place over many years until 1563. Many (mostly Protestant) Northern Europeans were already disputing the popes' jurisdiction, financial and temporal powers. There were also issues within Italy itself with cardinals having radical ideas, eg., revivification of the inquisition as a weapon against dissent. The Protestants had already employed the use of prints and the printing press in a propaganda war, often portraying the pope as antichrist. From that position, it is a long way back to reconciliation. Deliberations took place around the Immaculate Conception, images, Eucharist – to work out what was heretical they had to define, clarify and solidify the church.

What were the main issues of contention?

Eucharist; This was central. When the priest holds up the bread and wine and says the words of the mass, it becomes the body and blood of Christ (transubstantiation). Barocci 1591 demonstrates the importance of the Eucharist. In Catholic churches, the high altar is a place for the body of Christ and the true presence of God so this impacts on the architecture. Luther oscillated on this issue but other protestant reformers insisted that the bread and wine is for remembrance only, so the altar/table becomes of secondary importance and the emphasis is on the pulpit (the word).

Saints; Caused a huge break between Catholics and Protestants and an area of conflict with Catholicism itself. Saints had caused theological disagreements and in fighting for some time. The proliferation of cults of saints throughout the middle ages had Catholics questioning their relevance and so many are declared null by Church.

- Guercino ‘Madonna & saints’ – Mary being an intercessionary saint. As holy figures they were designed to intercede on behalf of the faithful, images of them depict them as close to god, providing visual proof of hierarchy of heaven. As mother of god, the virgin was the most important saint. Everyone had their local cult/church/saint/relict and it was a symbol of local pride and power.
- Domenichino ‘St Cecilia distributing alms’ 1613 – a saint as exemplar, not intercessionary. Catholics said that Saints were role models, showing people how to behave, they are good people. So showing St Cecilia being charitable was teaching people to do the same. exemplary behaviour 'charity'. If we want to get to heaven, then by being as self sacrificing, that is something we should follow.

Protestants reject saints because intermediaries are unnecessary if you had the word of god. Lutherans believed saints and relicts were superstitious and unchristian/pagan, far removed from scripture. There is nothing in the bible about cults, they were a later unnecessary invention as saints are just ordinary people.

Language; Protestants practiced mass in the language of the congregation, unlike the Catholic mass which was in Latin which lead to a different relationship between the priest/vicar, events and people

Hierarchy; Luther argued that the people didn’t need priestly intermediaries. If scripture is the word of god, everything should be based on that. Catholic bibles were in Latin which prevented easy access even if people had been allowed to read it. Knowledge of the bible was learned from images, procession, festivals, theatricals, little was rooted in direct access to scripture. Protestants advocated the word of god in the vernacular and accessible to all. Again this isn’t as simple as it seems, the bible was created from a number of texts in different languages and meaning had been muddied over time. Humanist philologists such as Erasmus had set about ‘cleansing’ the text and going back to the original languages. He was linked to the reformers but was a catholic who attacked popes and disagreed with church hierarchy. The catholic church examined the Vulgate bible and decided to keep it as St Jerome had written it. Erasmus said Jerome was wrong which had a ripple effect, how can you interpret the word of god based on mistranslation?

Pre Council of Trent, St Jerome was depicted in the wilderness with his lion and rags. Later, he appears in his study, writing the official version of the bible, the ultimate stamp of approval. Catholics stress importance given to centuries of interpretation by church fathers, Augustine, Aquinas, Jerome. Gregory and they appear in paintings as divinely inspired with halos. Carlo Maratta ‘Assumption of the virgin and the doctors of the church’. Protestants got rid of tradition, relying on scripture alone.

Justification through faith alone v Salvation through faith and good works; Protestants say you are only saved through faith, you do not need confession, hail Marys, penitence, money. You do charitable good works but they don’t buy you time off in purgatory. Of course, Catholics had to be truly repentant as well as doing good words but something like building a church in your own name might be classed as pride in your name and wealth. Pride is a deadly sin...lots of Catholics questioned good works. There are many painters of sinners who repent, eg., St Peter, Mary Magdalene, not with oil to anoint feet but a penitent Mary. This demonstrates the huge importance of confession, indeed after the Council of Trent, fixed confessional are added to churches which changed the architecture.

Foundation of New Orders
Ignatious Loyola - These new orders were crucial in strengthening the church’s position. Paul III approved the Society of Jesuits, who become hugely important. Unlike older orders, they were not enclosed but went out and taught as missionaries. They were highly educated in own faith, they saw what was happening, brought back the faithful, converted the infidel to the one true faith. San Filippo Neri and his followers were also important in reaching out and inspiring the faithful.

Most important to this course is the 25th session which discussed images. They held that as long as the image/relict/statue wasn’t venerated, they were useful as teaching aids, exemplars and inspiring devotions. The grasped how powerful the visual was and how images reconnected people with their faith but artists had to represent things accurately. As already mentioned the Protestants used prints as propaganda, but generally religious images were problematic – hence the widespread whitewashing and iconoclasm in Protestant countries.