It seems timely that Monday’s class was about altar pieces. Given that Hasan Niyazi spent so much of his time investigating and writing about these hugely important paintings, it was soothing to connect with his memory and contemplate some of the wider issues of church art. Hasan concentrated on the pre-Trent period when, it might be argued, the images had a gloriously balanced aesthetic and an aura of beautiful unreality. You only have to look at The Madonna di Foligno to see the difference between Raphael’s abilities and some of the less than average artists we've seen this term.

The focus this week was the way that the altar pieces interacted with the rest of the church; that is to say everything from the liturgy, the architecture, iconographic program, saints patron as well as the wider community. After the Council of Trent, the Eucharistic became of central importance and the altar piece usually reflected this. Our tutor stated that they were more likely to have symbolism in them after Trent than before, a statement which has had me puzzling since I returned to my notes. I would heavily dispute this given the amount of iconographical studies of some difficult altar pieces pre-1563. However what I think the lecturer meant was that symbols were used in a different, more unsubtle way and became easier for the congregation to 'read'.


Carlo Borromeo appeared again in relation to his book on architecture and in doing some reading around these (this week, very poor) lecture notes, I came across this article, which says.

First and foremost, Borromeo had very practical concerns. He wanted the churches to be solid and weatherproof; he wanted the interior spaces to house adequately the sacred rites, and to permit an unimpeded view of the main altar. However, as he continued with the visitations and the alterations to the buildings, Borromeo gained experience. This process had two important outcomes. First of all, the churches began to conform to a standard model in their configuration and furnishing. Side chapels and the baptismal font had discrete settings, but the interior would focus on the main altar—adequately sized and in an appropriate space that was carefully delineated from the rest of the church—which was the setting for the tabernacle. Prior to Borromeo’s efforts, there were various forms and settings for the Eucharistic repository, but placing it on the main altar was not a universal practice. The young archbishop apparently considered the options in light of Catholic dogma and piety and decided that the main altar was the only appropriate place to reserve the consecrated host. (my emphasis)


The whole church building is focused around the altar, which underlines the importance of Eucharist. The images we saw in class (above) demonstrate what Borromeo meant. The altar is open, clearly visible and yet up some steps and contained within the balustrading. This ensures that it is slightly apart from the people, as is appropriate for the most holy place in a church.The painting above the altar, though obviously important, doesn't have a liturgical function. Without it, the space would still work from a religious point of view because it is not part of the service and the essential elements for the catholic mass are there - the candles, the crucifix and relic within the altar (is this right?). So we might come over all Methodist and ask, what is the painting actually for??

Altar pieces are specific types of painting and we went through a range of them. The first example is the Cerasi chapel in St Maria Populo. There is a good article on this called 'Observations in the Cerasi Chapel'  by Leo Steinberg at Art Bulletin, 41:2 (Jun., 1959), pp. 183-190 which goes into a lot of detail about the Carravagios. Unlike a few other articles about this chapel I've read, it does put the paintings in their architectural context, though it still doesn't dwell at any length on the Carracci Assumption altar piece. However as our tutor also noted, the article acknowledges that the images are part of a larger decorative scheme, and as she continued, paid for by the patron who was buried there. So this chapel has to be looked at in the context of what the patron wanted.

The next altar piece was Bellini's St Job which is defined as a 'sacred conversation' piece. Mary and baby is surrounded by saints, an image which is natural successor to the earlier polyptych  with its separate hinged images of saints. This move towards naturalism with the people all in the same picture plane, creates a sense of unified space, even it if doesn't change or add anything in terms of meaning. However is the baby about matter changing its form? Whether the Christ child is a symbol of the Eucharistic is a matter for art historical debate but the nakedness of the baby is an interesting discussion point. In the book I reviewed on sensuousness, there was an article on decorum which is relevant to this - it highlights the humanity of Christ in a decorous way. They would rarely show a naked adult Christ. In any case this image is intercessionary; Mary is enthroned as prime intercessor, with the next level of saint below her - Trent reaffirmed the cult of saints and they must be venerated. Saints in this kind of image were never a random selection, eg. St Sebastian was thought to protect people from the plague, which was common in Venice at this time.

Next up was Sebastiano del Piombo's Raising of Lazarus 1517-19 which was done for cathedral of Narbonne. They held the relics of Lazarus and he was an appropriate subject for an altarpiece because of it's Eucharistic connections. Another pre-Trent altarpiece was Filippino Lippi's Carafa Chapel and this one is curious because it combines the Virgin Annunciate, St Thomas Aquinas, and the presentation of the patron to Mary the same time. It was unusual to have such a prominent positioning of the patron in an altar piece.

We moved on to later examples with Pontormo's ambiguous deposition\pieta (1528). If it is a deposition, where is the cross? It could be the moment just after the lamentation but whenever it was, the relationship between Mary and Christ has had a change of emphasis, been distorted and is emotional charged. After Trent, the dead Christ is popular in images - after all there can be no confusion in reading the Eucharistic connection between the wafer and the body of Christ. There is nothing ambiguous about the Caravaggio deposition of 1606 , there is a clear narrative and emotional response. The onlooker's hands are held up in supplication but there is no one to intercede, only Christ and he is dead. It's a powerful, truthful piece. This theme continues with Guido Reni's 'Crucifixion' for High Altar of S. Lorenzo in Lucina (1635). Christ occupies centre stage, there is no Mary to soften the image. (Incidentally there is an argument that Christ is an attribute of Mary because non narrative images of her alone are very rare. Mary fulfils a very specific role - mother of god but also intercessionary because she is human, sufferer, mother, and therefore approachable.)

Finally there is no argument about whether a painting is about the Eucharist if it is an image of the last supper. Here we had Barocci Institution of the Eucharist (1608). This is a very clear message about the catholic ritual of bread, body and communion wafer which Christ is instituting. A further Eucharistic Catholic ritual is presented in Domenichino Last Communion of St. Jerome, 1614.

We ended class with two presentation on El Greco's altar pieces. I find El Greco a truly disturbing artist because of his screaming modernism - his pieces would not look out of place in a contemporary space. Their execution with curious dramatic perspective and focus are familiar from pieces by William Blake and it's this I find shocking. Still, he was a good counter reformation artist and his religious works contained appropriate subject matter - Christ in infancy, the Passion, Resurrection and Ascension. He was exceptionally well read and was versed in current affairs, Aristotle, and liturgical aspects of mass. It has been suggested that some paintings are related to specific stages of the mass. We looked at the altar piece of Santo Domingo which is a collection of arguably linked images of the Adoration, Resurrection, Acceptance of Christ into heaven and the Assumption of Mary. These are important moments in life of Christ and the mass. Designed for Don Diego de Castilla it is burial chapel for him and a lady called Dona Maria. Whether they combine to make up an entire visual representation of the mass, again is a matter for debate but as Dr Caldwell says, anything you have to really labour and force probably isn't a happy interpretation. But the images combine to make something very powerful, which is what they are supposed to do. 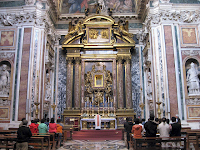 In conclusion then, altar pieces are there for many reasons. 1) Narrative: they are there to tell a story which may be associated with the patron or Saint of the church (or both); 2) Intercessionary: they are there to reassure the congretation the Saint that they will plead for God's forgiveness for us; 3) Eucharistic: they are there so that the congregation can make a direct link with the mass and the image. Whichever the patron chooses, the artist hopefully has created something to decorate the house of God, heighten our emotions and make us feel part of the mystery and wonder of the church.

Something light on relics and propaganda coming up next...