The BMA Library: Mission Anything is Possible 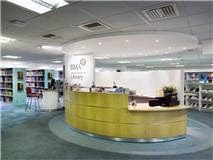 Last July I went on a visit to the RCS Library and so when an opportunity came up to visit another high profile medical library, I was quite excited. CLSIG organised a trip to meet Jacky Berry at the British Medical Association for an overview of the services they offer to their 152,000 members.

The library is unmissible. As you go through the swish main reception area and security gates, arrows and a sign LIBRARY points you upward. As you head up the flight of stairs, you are met with a model of bright modernity, with low wooden shelving, open work spaces and plenty of natural light. A successful team of 13 offer a suite of services to their members, and they see themselves as 'a working doctors library' providing access to a diverse book collection - from clinical to business management. They provide journal alerts, full text doc delivery, electronic services, training to all, and they have a high profile within the BMA.  Last year they had 19328 visitors!

It wasn't always like this. Like all excellent library services, it requires continuous commitment and investment from library staff and senior management. Jacky was initially engaged on an 11 month temporary contract in 2006 to oversee a library move, however, in reality the situation was so bad, there was talk of shutting the library entirely. The problems she faced included:
The move had been prompted by a building refurbishment so that the BMA could generate cash by hosting conferences, rent out office space, and improve their membership areas. As it happened the library area was targeted as conference space so they had to move the entire collection, including 5000m of archive shelving. Therefore there was no strategic library plan and senior management had no idea what they wanted to do with it. Given the expense, they wanted to lose it completely. After all, doctors and students could go to their own institute or college.

As an answer to anyone faced with this option, she says, stress the risk factor. Ensure that senior management are panicked, and aware of the consequences of negative publicity. The BMA library was established in 1886, so did senior management really want to tell their members that they care so little about their learning and development? What message would this send to the public? Closing libraries is an emotive topic so use to your advantage!

So after that danger was averted, what were the challenges of moving? Jacky wanted a library with a different welcoming look and was a future proofed library fit for a 21st century modern institution.

They offered her a relatively small, low ceilinged, mezzanine office space which had been empty for a couple of years. They were unsure of its weight bearing load and didn't think about the risks from the leaky air conditioning in the ceiling. The BMA branded carpet was dark claustrophobic blue and she was offered recycled shelving from the old library space. Furthermore, there was a H&S/fire risk because there was only one escape route.

She blandly stated that the space wasn't ideal. At this point we may have been stunned into incredulous silence!

She did the only thing possible in this situation; she went out to make friends with the Estate Manager who was overseeing the refurbishment. By engaging with him she was offered a series of concessions:
Whilst this was happening, with attendant logistical nightmares, they continued to keep the library open. As she said, it is easier to move into a green field site and the staff worked really hard during this time.

Library staffing was another real headache. On the day she started the job, the acting librarian left because the entire situation was horrendous. So rather than being able to maintain distance and carry out changes without getting involved, she had to immediately wade in and address the staffing issues whilst managing them. Given that she had already had experience of redundancy programmes, she was determined to get it right.

The two main priorities were keeping people informed (as far as legal processes could be), keeping an open door policy to scotch rumours, and ensuring that people had choice. She created a template for a staff structure and people could look at the skill set required and choose whether to apply for one job, all jobs, whatever. She was left with a smaller team who were happy and motivated in their posts, and relieved to finally have some direction. She arranged a programme of team bonding exercises to ensure that post redundancy effects were minimal.

There was the issue of her own post, which was still temporary. When she informed HR that they should be considering recruiting a librarian, they were puzzled and said, 'but that's you, isn't it?'. She accepted the full time post on the proviso that all staff, should they ask, be told that this was management's decision so that there was no ill feeling

Getting down to business

Everything was in place; now the hard work could really begin.

Personally Jacky said that her greatest achievement in the last three years was that people now seek her expertise. The library is now recognised as playing an important role in the institution which is an overwhelming change from a few years ago. The central location of the library is a bonus because whenever the BMA hosts conferences they are used as an IT access point for attendees.

They are reviewing the competition's services all the time and determined to remain the number one choice for students and young doctors. Their book lending by post remains the most popular services amongst their members. They are diversifying the stock in response to market forces so they are increasingly stocking management, employment and other business support material. Like lawyers, doctors are having to now focus on practice management and other unfamiliar areas.

Online library services remain at the mercy of e-publishing and utterly impossible to manage. The BMA is huge and she refuses to be held to ransom by grasping publishers who still haven't perfected the e-book as a library business model. They have Dawsons e-books using a pick and choose package.

The library has gone from 268 visitors before she joined to 19328 visitors last year. This increase, although incredibly gratifying, is problematic because they didn't plan for such heavy footfall. They have no capacity for more desk space in the library and there are tensions between students and consultants. This is a marketing issue because they have specifically targeted and sold the benefits of membership to students, with a view to keeping them well into their career. This doesn't just affect the library but other members' parts of the building, such as the coffee lounge.


Despite the negatives which have come out of overwhelming success, Jacky and her team at the BMA is a perfect example of a bad library turned good. Experience, combined with passion and commitment should convince any sceptical senior managements that a well run library and motivated, knowledgeable staff can help the entire organisation. Although if anyone has found a way of reconciling tetchy consultants with enthusiastic students, then Jacky would love to hear from you.