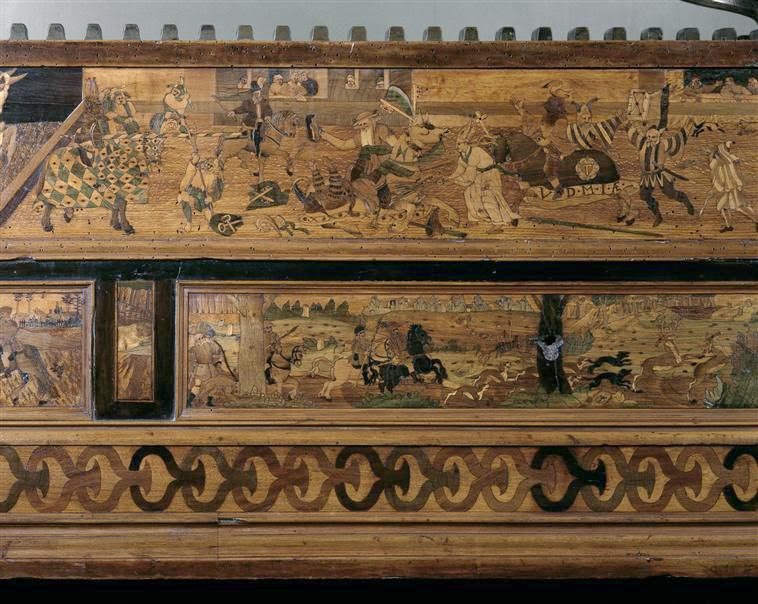 The wire drawing bench in Écouen is the only remaining object of its type. Although many plain wooden goldsmith's benches can be found in museum collections, this one from 1565 is unique. Just as modern scientific instruments are functional and lack a certain mystery, these plain workaday benches are nothing like the Elector of Saxony's wire drawing bench. They have been employed as indispensable goldsmith tools since the middle ages. An engraving by Etienne Delaune demonstrates how the bench was used; the long wooden beam was equipped with a crank, pliers and pulling iron, and used for drawing and profiling metal wires.

August I had a substantial collection of early modern state of the art machinery. Amongst many other items, it was was recorded in his 1587 inventory; 'one heavy inlaid draw bench with six lockable drawers and one heavy iron etched winch and two etched claws with screws to hold the drawing plates. Complete with a gilded iron gear box screwed on to the bench, one pulley with thong and one windlass of black ebony, adapted to draw wire of silver and gold'. Accompanying it were numerous pieces of beautifully crafted equipment such as bolts, pliers and knives. It also appears a larger than the one in the Delaune etching being an impressive 442cm long, 42cm wide and 79cm high.

Although the inventory mentions the engraving and various wooden attachments, the only description it offers is 'inlaid'. The entire bench is covered in marquetry and the solid wooden legs are heavily carved. Although there are many reasons why it is important, the decoration is the most obvious. It has been described as one of the most beautiful examples of German Renaissance woodwork. The decoration of the bench can be divided into three layers. The lower part consists only of a frieze, reminiscent of either pliers or a linked chain; both could be references to its drawing function and end product. On the main surfaces of the two upper levels, an impressive series of scenes tell a variety of stories. The middle section shows woodland or country scenes, whilst the top part provides an insight into courtly tournaments for entertainment.

This section of the decoration has been much discussed in the literature and everyone concurs that it is a contemporary satire on the continuing struggles between the catholic and protestant churches. It is presented in the form of a joust because the August was a keen participant in such exercises and they were of central importance to the court as a whole. Many of these tournaments involved complex allegory, therefore it is reasonable to suggest that it may have depicted an actual event. In any case, the scene would be familiar to August and he would have relished the spectacle.

It is laid out as one long tableau around a central group. It is clearly a pre-tournament procession, watched by gathering crowds of people. Small groups collect with their backs to us, the viewer, and we see the action as if standing behind them. Richly dressed ladies and gentlemen sit at a table with jugs, plates and flower vases in an open festooned banqueting hall. The feathered and caparisoned horses and their joust-ready riders come from the right and it promises to be a normal tournament. However the mounts coming in from the left are less conventional, including a bull, a lion, a hyena, elk etc. A wild man flees into the forest behind.

The other extremely busy side follows a narrative structure, from right to left and is in three sections. The first is a procession of mounted armed men, whilst music is provided by those on foot. The left rider of the first pair wears a swan as a crest and the letters VDMIA (Verbum Domini manet in aeternum - The word of the Lord for eternity) are clearly seen on his horse's blanket. This confession from Isaiah 40:8 served as the motto for princes who first earned the name 'Protestants' with their protestatio at the Diet of Speyer in 1529. The man on the other side wears a papal tiara, whilst the bridle of his horse carries the keys of St Peter aloft. This is clearly Luther and the Pope. Further depictions of the Protestant and Catholic churches follow behind, for instance the rider with the goose crest was Jan Hus, the first martyr of the Reformation; 'for now they shall roast a goose'

The action in the tilt yard begins as they prepare for the clash. Inevitably, given August was chief supporter of the protestant cause among the German states, the representation of the Catholic church is unseated and all is in chaos. Symbolically his shield of the cross keys is broken in two. Boys and fools mill about, adding to the movement and drama. The combat is over, the new reformed church triumphs over the Pope and Catholicism. In the final scene, further indignities are heaped on the defeated rider. A monk leads the horse away, whilst he is carted off on a wheelbarrow pulled by a couple of nuns. Fools beat these nuns on their bare backsides, which is an incredibly cruel and undignified action, but clearly August appreciated the ribaldry. The proud victor is led off and on they go.

The decoration of the ends of the bench helps identify the designer and makers of the bench. Although the master of marquetry isn't named, he is depicted in his workshop and the most important tool of his trade enlarged for all to see. His coping saw, used even today to create intricate external shapes and interior cutouts in woodworking or carpentry, sits as proudly as any coat of arms. AM hasn't yet been identified but he was clearly a master, as the graceful and atmospheric landscape on the opposite end demonstrates. The letters L and D and the pine cone refer to Leonhard Danner, the designer of the drawing bench. He was also responsible for the ornate metallic foliage and scrollwork, which is in all respects as complicated as the wood work. His excellent working relationship with the Elector is documented elsewhere. The elaborate crests which occupy the end's main space are those of August and his wife, Anna, Princess of Denmark.