Materiality of Art: Or is computer art, art?

It's rare that any lecture fails to spark a meteor shower of ideas but just occasionally I'm caught off guard. The LSE arranged an event to explore philosophical issues about art, and ask whether computer artworks are physical objects? Do they really qualify as art? The speaker Margaret Boden is Research Professor of Cognitive Science at the University of Sussex. I'd never seriously considered the more intellectual arguments about what constitutes 'art' and it also fitted in well with one of the German sessions of the Dresden conference which had focused on modern examples of mirabilia. I obviously hadn't written up that session so felt this was a good opportunity to synchronise some images and notes.

It's a good job I had some mental images of computer art because Boden provided no slides; 'she isn't into technology'. Was it wrong that alarm bells immediately started ringing? I don't paint with oils but I know how they feel, smell, am aware of their texture and understand their material 'paintiness'. I am no computer programmer but have a reasonable understanding of the architecture which sits behind the screen. My knowledge of marquetry is restricted to memories of my father and his woodwork, as well as reading how to guides, so I know about grain, colour, texture, symbolism. Historians of art require insight into the materiality of the objects they are studying, otherwise how do you understand the challenges that face the artist? It is telling that despite my linguistic incapabilities, I gleaned far more from Verena Kuni's visual presentation than Margaret Boden's words - pretty much the way when dealing with art!

Firstly, what was Kuni saying? The abstract of her paper stated:

Not only since the popularisation of 3-D printing processes do we encounter digitally informed things that refer to the characteristics of objects as they were formally collected in cabinets of art and curiosities. In addition to objects that were produced for concrete purposes and conventional usages, there are numerous things that appear like mirabilia of analog wunderkammer and are presented under relevant circumstances. To what extent of such objects good for further reflection through wonderment? Are approaches to deepened understanding of our analogue/digital culture opened up along the way? These lines of enquiry will be pursued with a selection of objects and with a view to projects by artists that are occupied with it reification complex of digital artefacts. 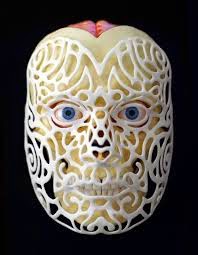 As she noted, early modern cabinets contained objects which could be divided into sections, eg., artificialia, natura, and mirabilia. She drew comparisons with scientifica using a microscope from 1774 and a DIY microscope (2013), artificialia using an c18th turned ivory sculpture and a 3D printed vase, and for naturalia she compared Levinus Vincent's Wondertoonel der Nature (1715) with Joshua Harker's entirely naturalistic artificialia Coleoptera (2012). She went on to argue that although computer art would theoretically come under 'man made' objects or artificialia, along with paintings, sculpture and other material arts, some of these creations could be classed as mirabilia.

I was most taken with Scott Kidall's data crystals which take particular collections of data and are turned into something beautiful and tangible. The description for the one produced for 'Location of Civic Art in San Francisco' says 'all the cubes are the same size and there is a lot of verticality towards City Hall. The tail on the left represents the art commissions at the SF airport'. I like that this is palindromic art; data on art which in turn becomes art'.

Kuni also went on to mention virtual art, which Boden seemed to struggle with, lacking examples with which to illustrate her point. If she had said Second Life, World of Warcraft, or virtual art galleries/cabinets she might been able to answer her questions 'Are computer artworks physical objects? Do they really qualify as art?' succinctly and straightforwardly, leaving the audience in no doubt. As far back as 2007, it was recognised that art was a true commodity in virtual worlds. Having discussed the creation of 'material' objects in Second Life with an expert, I am persuaded that the artistic input for such creations is as real as any painterly skill.

Boden started out in the wrong place, assuming that the audience would argue that computer art is not art. Whether this is because we are in London, with a highly literate and probably scientific audience, not only did we answer 'not necessarily' and 'yes', we were actually two steps ahead. We agreed that the materiality of a medium is what enables an artist to glory in the potential of that medium; it just doesn't matter that pixels, light or 3D printing are new media for artists to challenge. After all, what is photography?

We also agreed, and didn't need to be convinced about conceptual art. Art which is purely an idea is still art, even if there is only a memory, a plaque, or a document recording what happened. For this, I would always use Shibboleth as an example. This was a temporary art installation placed by Doris Salcedo in the Tate Modern in 2007 and took the form of a long crack in the floor. The marks are still there, despite the crack being filled in. It's not technically 'material', but it is art.

One interesting example she gave is Ernest Edmonds. His site says, 'his artworks are generated by systems and therefore bare neither representational qualities nor are they alluding to objects. In order to create those ‘constructs’ he works with patterns and employs algorithms to generate them. The composition itself became more important to him than the actual representation. He minimised the elements emphasising the structure of the work, not its surface complexity.' Is this art? Yes, given the human creativity and intervention, and aesthetic result. Boden stated that as an artist he baffles his audience with science, and doesn't really mind that people don't understand the logic behind his work.

Now I have an issue with this. Just as we struggled to understand the use of camera obscura, paint composition, light effects, building construction etc., in early modern art, research is revealing so much that it is giving us a new appreciation of the skill that went into these objects. As I pointed out at the start, you cannot be an art historian with out some understanding for how something is made. If I was to be writing about this artist, I would make it my business to speak with people and find out about the algorithms. For the artist, to dismiss your audience is perhaps an arrogant mistake. But I also think to talk about an artist without understanding methods and materials is a mistake.

Which is to bring me to the end of this piece of artificialia; without informed understanding and concrete examples of immaterial art, it is hard to convince an educated audience, even when they're on your side. It also shows - again - the importance of defining terms which was lacking in both talks. I wish I'd been chairing the LSE talk because there may have been some very difficult questions. However the Dresden conference images enabled some interesting comparisons.