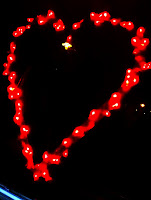 Let me put this to you straight; I don't have an issue with Valentine's Day. I am secretly an old fashioned romantic and a day in cold mid February celebrating the hotness of love is to be enthusiastically lauded. In fact knowing it to be rooted in ancient Roman feasts celebrating Juno Fructifier and Lupercalia makes it far sexier, fascinating and visceral than a semi Christian non feast day. It's more the tenuous connections commercial organisations make that get me steaming. An excuse to sell you something meaningless when your lover would rather more time with you; to simply hold hands in a park, giggle in a gallery, or something far more intimate.

This isn't going to be a tedious diatribe about the evils of commercialism (or religion). Though I retain my art critic's hat, I'm embracing and exonerating this exhibition from my usual cynicism. I'll allow them to seduce as many visitors into buying art objects for charity.

As Contemporary Applied Arts say on their website, 'in collaboration with the British Heart Foundation (BHF) and to coincide with the run up to Valentine’s Day, CAA is staging a spectacular selling exhibition to spotlight the BHF ‘Mending Broken Hearts Appeal’. The goal of the Appeal is challenging, yet simple; to spend £50 million to fund groundbreaking research that could begin to literally ‘mend broken hearts’ in as little as ten years time'. It is a partnership which has the potential for creativity and raise awareness/cash. But is it successful as an art exhibition? What is the art like and would I buy it?

The CAA's space is a two level white cube space, brightly lit with both artificial and natural light from the window front and skylights. The exhibition was upstairs in the gallery and all manner of applied arts are represented including pottery, furniture, glassware, jewellery, metal work and a variety of other craft techniques. Joyous riotousness is the overall first impression; the colourful three dimensionality of the eclectic objects combined with variety of textures and materials makes for an interesting collection.

The artists were given a brief, simply 'mending broken hearts'. Some took a personal experience of heart disease and imbued their piece with this narrative. For instance Ronald Pennell's bronze medals and glassware were dedicated to the cardiac staff of the hospital after giving him life saving treatment last year. Andrew Wicks took his porcelain vases and carved rhythmic indentations in them to reflect the beating heart. From the installation of gently rotating delicately tinted glass heart mobile to Peter Layton's bowl of 'strange fruits' the objects took on a talismanic character, reminiscent of the Charmed Life exhibition at the Wellcome Collection. For me, some items failed to achieve this magical quality and they were the ones that were merely 'pretty objects', for example the white wire hearts and some of the (admittedly lovely) jewellery.

However a couple of items transfixed me. Continuing with the Wellcome Collection style of science/art were the Susie Freeman pieces. The largest called 'Metabolic Syndrome' (detail left) is from the Pharmacopoeia series. It consists of a large coiled loop of black netting, containing all the pills that an obese middle aged man would take in a year if he suffered with heart disease, high blood pressure - 'complaints that are metabolically connected by an increased resistance to circulating insulin'.
This stunningly dramatic yet scary piece reminds the viewer of both the importance of maintaining good health, but also the cost impact of modern medicine in terms of resources. It is not something we should take for granted. The looping of the black netting appear to reflect the internal structure of the body and the tablets, the blood cells within being constricted by an unhealthy lifestyle.

Her other piece attracted me because it celebrates nature's physic garden. She'd taken her mother's book of wild flowers and selected illustrations of flowers with medicinal uses, such as St Johns wort, willow and gentian. She ripped them into heart shapes and pinned them together like a specimen sheet, producing something that a medieval herbalist could use as reference. It is a work of old fashioned artistic delicacy.
One comment was, 'I hope her mother didn't mind her ripping up her favourite book!' 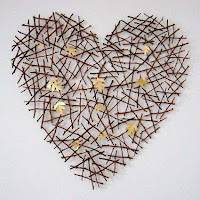 The one thing that struck me was the inspired use of natural materials and finally to the one item I would be happy to present to my Valentine. Lizzie Farey's 'Hawthorn Heart' is a painstaking creation of twigs fastened together, reminiscent of intricate blood vessels, then scattered with gold plated hawthorn leaves to add visual and textural interest and shimmer. The caption informs us that hawthorn has been used as a heart tonic for centuries and that the Greeks and Romans viewed the tree as a symbol of love. Which brings us full circle and a return to a truly special Valentine gift routed in nature, mythology and love.
Posted by Clareangela at 19:34