What's it worth? : Sounding out art

A few years ago I wrote a piece about the commoditisation of art and then this week an article in the Independent rekindled my interest. The story is nothing new – people have always spent large amounts of money on big name paintings. I don’t have a problem with that because it’s their money, their investment and keeps the art market interesting. Currently London’s commercial galleries can afford to experiment and are putting on some seriously thought provoking stuff, e.g., Lazarides and their Old Vic Tunnels shows. 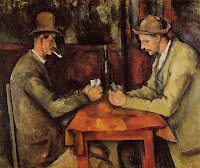 Everyone is agreed that the majority of art, for better or worse, is a commodity that can be bought and sold for stupendous amounts of money. As the Indy article says, ‘it emerged this month that Qatar had bought ‘The Card Players’ by Cezanne for a world record $250m at the end of last year’. Writing in the late 1990s Julian Stallabrass naively noted ‘the rise of art prices in real terms through the 1980s was a sign of the commodification of the art world as a whole, not merely the result of excess funds looking for investment projects’.[1] However I think this has changed; the wealthy are looking for a safe place to invest their money. But it still makes me think, what about art you can’t put price on? The art you can experience but can’t buy?
In response to the universal postmodern embracing of this commodification, many artists over the past few decades have turned away from the traditional art forms and are exploring other ways of self-expression. This has manifested itself in new forms of art such as landscape art, performance art, conceptual art, and sound art. It is this last one that fascinates me.
There are as many types of sound art as there are practitioners, for example, soundscape recordings, electro-acoustic composition, environmental performance works, all of which can be mixed and presented in different ways. Two well known proponents of the art, Max Neuhaus and Michael J Schumacher are agreed that the point of sound art is the moving away from art as a commodity or value because sound is an experience and not an object.[2] Schumacher explains, ‘I’m trying to create situations where people come to it as experience and value that’.[3]

My first experience of sound art was Bill Fontana and ‘River Sounding’ at Somerset House. He filled the coal holes, the Deadhouse under Fountain Court, and the Embankment entrance with atmospheric recordings from different parts of the river Thames. Taking sounds from nature and presenting them as an installation in situ rather than in the gallery or concert hall is part of the experience described above. For me to use images and sounds of the river to evoke memories in a place which has known and been connected with nautical trade and industry for many years is an exciting concept. And most importantly, it was a one off, non commoditisable experience. A recording would be meaningless given the symbiotic relationship between sound and space.

Around the same time was Chris Watson’s dreamy Whispering in the leaves, ‘an extraordinary sound installation that immersed visitors to Kew Gardens' Palm House in the dawn and dusk choruses of the Central and South American rainforests over the course of Kew's Summer Festival 2010’. It was entirely appropriate to the space and enhanced the atmosphere of the green house, transplanting it straight to the tropics.

Then a sound artist won the Turner Prize in 2010. Susan Phillipsz's installations ‘A Song Cycle for six open spaces in the City of London’ around the city were spine tingling. Whilst you can know the history of a place intimately, there is nothing like hearing the madrigals, songs and street cries from a distant time in places they would have been known. In the silence of a weekend city, the voice recordings’ eeriness was perfectly uncanny. But again, space appropriate.

The final example moved me profoundly, proving being familiar with a concept doesn’t make you immune from its effect. Fontana in conjunction with Wellcome created a sea/cityscape called ‘White Sound: an urban seascape’, ‘noise from the gridlocked traffic on Euston Road,  London will be replaced by the sound of waves breaking onto pebbles’. Anything which makes you stand still on a busy main road and soak up the noise surrounding you is very special, moving me to note:
Traffic roar / Elements raw / Sounds surround / Nature unnatural / Sounds unseen /
Between cars and sea / Time's still and ears thrill
Money cannot buy this experience and it was free to all if you were alive to the sounds around you.
Art theory ebbs and flows with certain areas being more popular than others. ‘Sound art’ has proven troublesome from the outset with ongoing debate concerning just the definition of the term. It is essentially an art which looks at relations; between individuals, between artists and the world and between the listener and the world. Echoing Schumacher above, philosopher Jacques Racière states, that this ‘art no longer tries to respond to an excess of commodities and signs but rather to a lack of bonds [connections]’ and thus ‘intends to create not only objects but situations and encounters’.[4] Connections in art, above all, are the most important way to establish meaning and engagement.
People are welcome to invest in an impressionist painting as their pension and store it in their bank vault for the future but ultimately it may as well be gold or precious metal because unless someone is engaging with it, it’s meaningless as a piece of art. Art of any kind is there to be experienced, to move you, to make you feel. If you can’t buy that experience, then it becomes even more valuable, if not priceless.