'Overcoming Hurdles’: Photos at the London School of Economics

The LSE is providing a wealth of entertainment this week with the Space for Thought Literary Festival (probably more on that to follow) and the LSE Photo Prize exhibition: Overcoming Hurdles which opened today. The website describes it as ‘the 6th LSE Photo Prize Exhibition 2012 showcases a wide range of photography by LSE students and staff. Photos have been selected by a judging panel of art professionals and LSE staff.’ 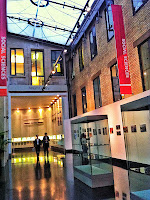 The small, ‘perfect for a lunchtime’ exhibition provides catalysts for conversation because of the photographers’ broad interpretation of ‘Overcoming Hurdles’, it covers an interesting range of themes. Hurdles in education, discrimination, poverty, environment, geography, age, psychological, and height are depicted.
Though pictured in very different ways, transport is a recurring theme whether it is a frenetic group of people mending a jeep on a red dirt track or a man in a wheelchair being towed by a scooter on a busy city street. Arman Mohammady’s ‘The Road’ shows a dramatic Middle East mountain landscape, intertwined with an isolated track. This is the only sign of any human existence in the picture and it is a lonely atmospheric piece. As a contrast, I enjoyed Marco Puzzolo’s ‘Flying Dreams’ where a small propeller plane being observed by a group of school children. We are part of the wistful group looking; all you can see is backs of heads, all eyes on the plane. It is clearly the most efficient way of being transported from this seemingly remote location. No matter how difficult the geography, we have overcome the challenges communicating with remote communities with ingenuity.
Another aspect of geography is touched upon in terms of human impact on the environment. The cold and isolating ‘Urbanised village and its struggle to survive’ shows modern skyscrapers juxtaposed with ordinary apartment blocks, with a littered lake in the foreground. The residential blocks are not obviously run down but in comparison to the silvery office blocks there is a sense of disconnect – perhaps an economic hurdle. Contrasting the urban landscape are Will Plowright’s two photos, ‘Ranger 1’ and ‘Ranger 2’, which show a lush farmed landscape being patrolled by an armed man in camouflage/military fatigues. The terraces look and feel ageless like layers of rock strata with the man simply being another transient human life to be consumed by the land.

Overcoming ignorance through education is another popular theme which you’d expect given that the photographers are students and lecturers. Classrooms of many types are shown complete with children reflecting the traditions of the country where the picture was taken. The children in the images convey a sense of positivity, with a smile, the gentle touch of a sibling or the pride in their school books.

Age is also touched upon and images from east and west are side by side for ease of comparison. Sylvia Chant’s ‘Contemplating Eighty’ shows a good looking, well dressed serious elderly lady who is perhaps the contemplatee of the title sat next to a gentleman drinking a glass of wine. Perhaps it’s her birthday party? The other images of age are the ‘Passage of Life’ by Manal Massalha-Tasker and ‘Buddhist Undertaker' by Dimitra Setia. Both of these are beautifully taken in black and white to emphasise the interesting facial features, both are dignified and moving.

The next photo along shows a small child trying to reach up to drink from a water fountain, hampered by her lack of height, she is overcoming her frustrating hurdle by determination and fierce independence. A charming shot of ‘Summer Heat’.

Political hurdles and law enforcement are also represented. ‘The One Percent’ is a photo journalist shot of Julian Assange. The title seems to refer to his site Wikileaks only publishing 1% of the diplomatic cables that were hacked. It is a striking and the subject very controversial. Is it overcoming hurdles regarding the spread of information? Unlocking locked computer networks? Complementing the Assange picture is my favourite image of the show and depicts a police officer who is doing his job. ‘All in a day’s work’ by Brian Gaschler is an intimate portrait with the male officer displaying pensive vulnerability under the uniform, his youth and the dark circles under his eyes attracting sympathy from the viewer.

Never having been to the LSE's Old Building Atrium Gallery, it is a treat to find such a modern, light, airy public space. And when it contains a collection of thought provoking images then it becomes an excellent excuse to get out of the office and see stuff.
Posted by Clareangela at 17:11