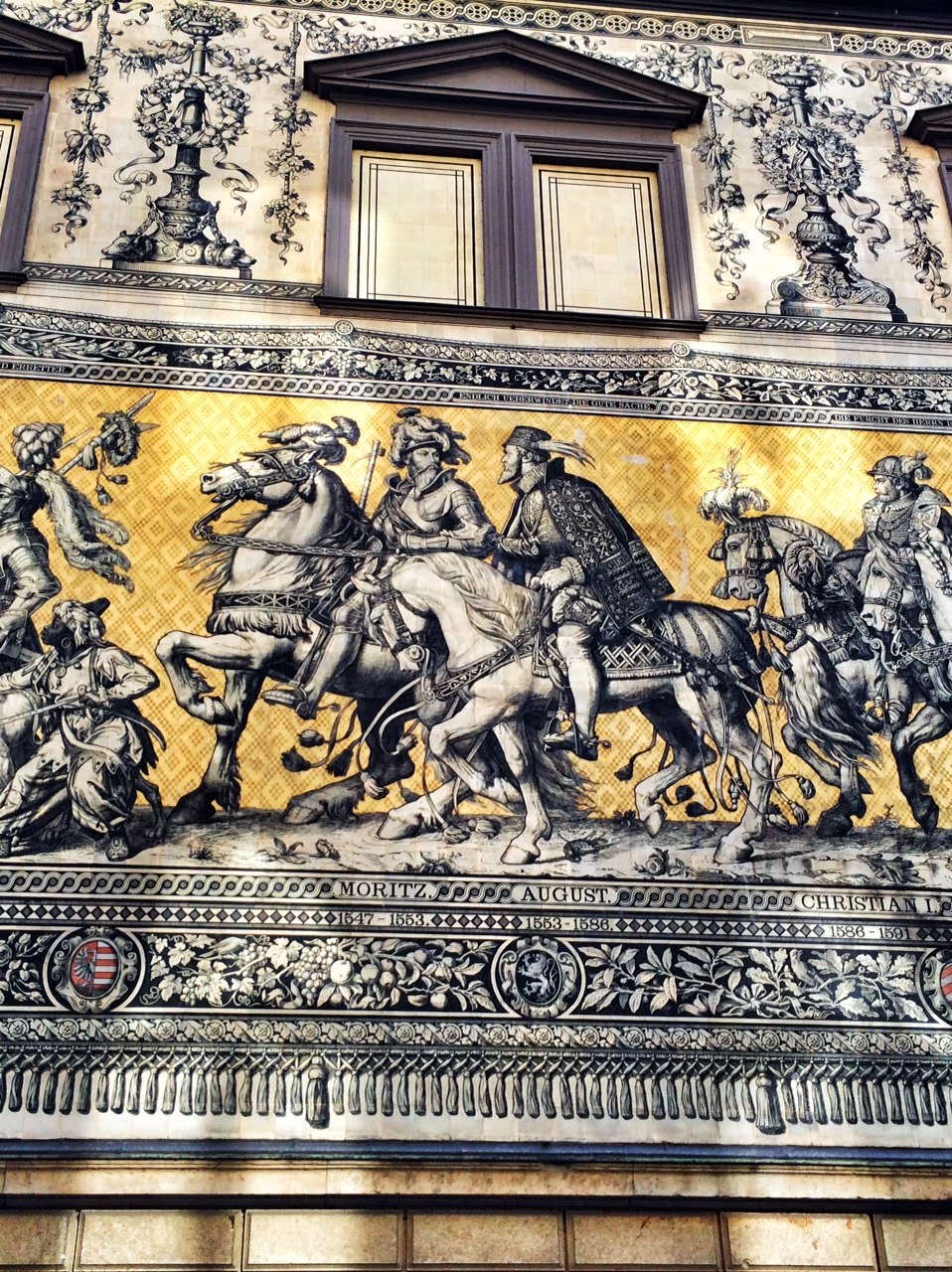 In the heart of royal Dresden, along the Augustusstrasse, attached to the back of the Royal Mews, a 102 metre long ceramic mural dominates the street. Known as the Procession of Princes or Fürstenzug, Saxony’s rulers from the first, Konrad the Great (1127-1156) to the last, Friedrich August III (1904-1918) are shown. Originally painted between 1870 and 1876 by artist Wilhelm Walther to celebrate the 800 year anniversary of the Wettin dynasty, they were originally presented in limewash and stucco but were made permanent in Meissen porcelain in 1906-07.[1]

It is not my intention to compare the Procession of Princes with Elector August’s (1526/1553-1586) wooden and metal wire drawing bench, however, these two pieces of art reflect many of the themes that I discuss. Given that rulers, collections or works of art should not be seen in isolation, either in terms of artistic, political, religious or international events, this ceramic piece provides a situational and introductory backdrop. The minute and personal detail of each ruler suggests the importance of order and peaceful progression; in the case of some of the rulers, this is mere magisterial propaganda and their ‘procession’ was not as straightforward as the porcelain depicts. Look beyond the ceramic glaze of the tiles and the scholar sees the economic importance of manufacturing and natural materials, which contributed to the prosperity of the state. Elector August recognised local craftsmanship, and he encouraged skills and knowhow of artisans by employing them at court. It also eloquently demonstrates the love of show and parade of might which was central to Saxon court culture throughout its existence.

In this dissertation I want to use the wire drawing bench which dominated August’s collection ‘kunstkammer’ from 1564 to both to illustrate his interests and explore how he built up the prosperity of Saxony during his reign. It is first necessary to contextualise his position against the wider European situation. I will then focus on his court and the people that surrounded him, in particular Leonhard Danner. He was responsible for many inventions and tools which remain in August’s collection, including the wire drawing bench, one of the collection’s most singular items. I offer an outline of the academic literature about the bench, provide a full description and discuss the decoration which has never been fully interpreted. Finally I will propose my own theories and look at the ideas what may have influence the designer in the bench’s creation.

The core themes of this essay are encompassed within the late renaissance fascination with ‘work, science, technique and art’.[2] This interest in the world around them manifested itself in the creation of ‘cabinets of curiosity’, a way of comprehending and encapsulating ‘the universal nature’.[3] It is helpful to be aware of these collections which August’s princely peers were establishing and developing at this time.[4] Each one was unique to the person directing the collection so the scholar must be careful not to generalise and must allow for individual interests. However unlike many of August’s princely contemporaries who were fascinated by natural philosophy and the quest to interpret and explain the hidden mysteries of nature, he had other, more practical priorities.[5] His collection was recognised as unusual at the time and contemporary experts did not class it as an ‘Italian princely’ collection. In 1587 Gabriel Kaldemarck attacked it and wanted to remove items 'because they are not works, but mere instruments and tools, to produce different works'.[6]

As I shall explain, August was interested in exploiting his state’s natural materials to establish it as wealthy, independent and prosperous. Therefore his collection reflected this drive to measure, map, engineer, and improve all technological methods being developed in the southern and central German states at this time. For instance August’s enthusiasm for inventive and carefully designed crafting tools was shared by the landgrave of Hesse-Kassel, [7] the duke of Brunswick, the elector of Brandenberg, the king of Denmark and the duke of Savoy. These contrast sharply with Rudolf II’s wunderkammer in nearby Prague[8] and the Medici studioli across the Alps in Florence.[9] I shall elaborate on reasons for differences between the various collections because they are important to my core themes.